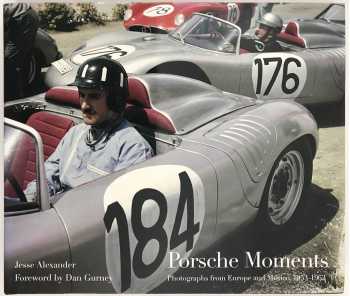 Signed by the photographer Jesse Alexander. Out of print.

Jesse Alexander produced some of his most indelible Porsche photographs between 1953 and 1962. These images reflect an unsurpassed level of access, both in terms of where Alexander was free to roam and work, and also, more critically, in the openness of his subjects. It's this quality that gives his photographs their unusual intimacy. Drivers and team principals appear relaxed and unguarded, a result of his personal friendships and familiarity with his subjects. Though he is best known for his black-and-white work, Alexander's early color images are also featured in this book.

These photographs possess a distinctive sense of a fleeting moment captured, which inspired this book's title: Wolfgang von Trips and Umberto Maglioli celebrating their strong finish in the 1956 Nurburgring 100 Km, excited schoolchildren flocking around the transporter as the cars for the 1960 Targa Florio are unloaded, or Dan Gurney, intently focused, as he sits in his car during practice for the 1961 German Grand Prix. The sense of the moment is enhanced by dramatic lighting, whether it's a strong mixture of light and shadow on a backstreet in Monaco or evanescent highlights on gleaming race cars, their unpainted aluminum bodies seemingly luminous.

Alexander was beginning his photography career at the same time Porsche was in its ascendancy as a manufacturer. This was an exciting and critical time during which the company's smaller cars challenged and increasingly beat bigger, more powerful rivals. Porsche competed in production-car classes with the 356; in sports-car and GT classes with the spyders and exotic coupes; and enjoyed a few brief-but-successful seasons in Formula 1 and Formula 2. These cars were raced by some of the best drivers of their day, a charismatic group that included Edgar Barth, Jean Behra, Jo Bonnier, Dan Gurney, Hans Herrmann, Graham Hill, Umberto Maglioli, Harry Schell, and Wolfgang von Trips.

Porsche Moments is a vivid look at a defining period for what has become one of the world's greatest sportscar marques, and of the parallel career of one of motor racing's preeminent photographers, who was there to chronicle this pivotal moment in time.