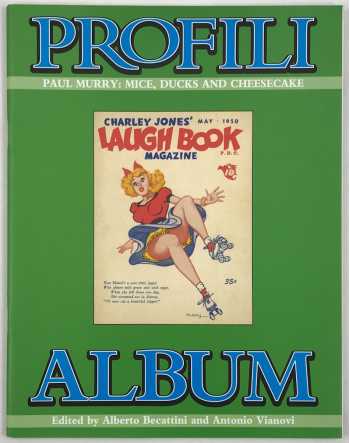 Scarce. Profili Album Paul Murry: Mice, Ducks and Cheesecake (Glamour International, 2002) features a generous selection of Murry's girlie cartoons done in the 1950s along with a sequence from the Buck O'Rue western comic strip Murry did with writer Dick Huemer from 1951-1953.

Paul Murry (1911-1989) was an American cartoonist and comics artist, best known for his Disney comics, which appeared in Dell Comics and Gold Key Comics from 1946 to 1984.

Like many Disney comic book artists Murry started his career working at the Walt Disney Studios. During his time there he was an assistant to legendary animator Fred Moore. He was also an animator and in-between artist on several early Disney animated features, such as Pinocchio, Fantasia, The Reluctant Dragon, Dumbo, Saludos Amigos, The Three Caballeros and Song of the South. In the 1940s, Murry worked on Disney newspaper strips. After leaving the studio in 1946 he began to work for Western Publishing doing stories featuring the Disney characters. He is best known for his rendition of Mickey Mouse and associated characters.