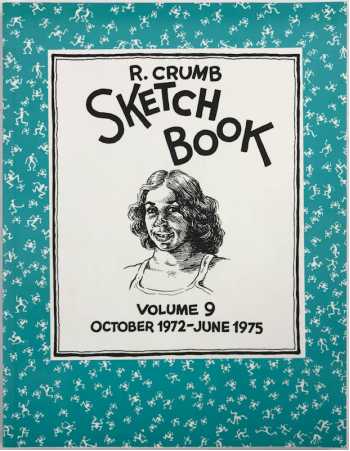 An incomparable, ongoing masterpiece. R. Crumb is undoubtedly the foremost cartoonist of the latter 20th Century, and his sketchbooks--in which he has written and drawn continually from the early '60s to present--might rank as his finest achievement.

Fantagraphics is proud to present these sketchbooks, in facsimile form, as a comprehensive series of volumes that will eventually run well over 4,000 pages. Volume 9, covering 1972 through 1975, is the latest and it represents one of the more inquisitive and soul-searching periods in this phenomenal artist's life. These sketchbooks represent, in essence, something never before achieved in the field of art and literature: a single, unified, organic (and ongoing) life's work. Even more so than the painter Frida Kahlo's drawn diaries, Crumb's sketchbooks are, as a body of work, incomparable in their magnitude, scope, and intensity, and therein lies their uniqueness and value.

Unrecognizable as straight autobiography, these books chronicle Crumb's perceptions more than his life itself. As such, they offer a rare and often raw insight into process: how ideas are formed, how connections are made, how technique and craft are honed, and how the ability to "see" is truly cultivated. The cumulative effect of these sketchbooks is to narrow the gap between the artist and his art; or, to put it another way, to create such an intimacy as to render the profound connection between art and humanity palpable. These sketchbooks also stand as a monumental existential document.

Crumb repeatedly expresses, through a variety of penetrating and coruscating visual metaphors, the central existentialist struggle: to live in the full light of consciousness with all the risk, pain and suffering that entails. Nowhere is this more apparent than in this ninth volume, which coincides with Crumb's rise to fame and rejection of the late '60s hippie counterculture that made him famous. Like every volume in the series, though, Volume 9 offers the full panoply of a life of perceptions rendered with consummate artistry.