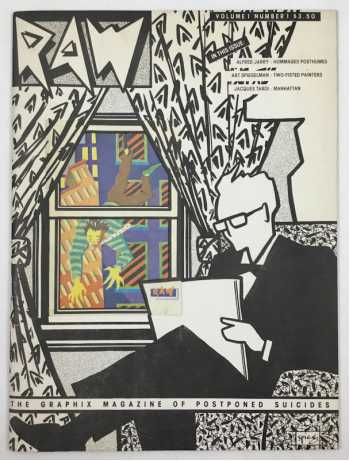 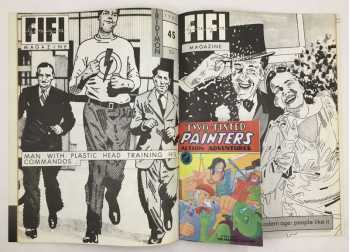 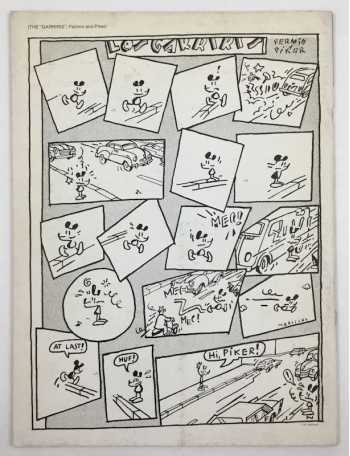 An attractive copy of the first issue of Art Spiegelman and Francoise Mouly's New Wave Comix Anthology featuring an international roster of writers/artists.

36 pages of black & white comix with a color plate on the cover and a 12-page color comix insert: Art Spiegelman's Two-Fisted Painters

"The first issue of Raw, published in July 1980, featured a full-color "tipped-on" image glued by hand onto the black and white cover. A copy of Spiegelman's small format, full-color "Two Fisted Painters" was bound into each issue. According to a 1985 Village Voice article, "Raw 1 was printed three times before [Mouly] found it acceptable." Finally, out of roughly 5,000 printed copies, the official print run comprised 3,500 copies that met Mouly's approval. Several of Raw's initial contributors were cartoonists who Mouly and Spiegelman had either met in Europe or whose work they had encountered in European publications. Others, such as Heinz Emigholz and Patricia Caire, were associated with the filmmakers' collective that Mouly and Spiegelman had interacted with. Kaz, Mark Newgarden, and Drew Friedman were among Spiegelman's students at the School of Visual Arts."

Near Fine (only light wear to the white covers, mild darkening to the page edges,otherwise very flat, tight, sharp)