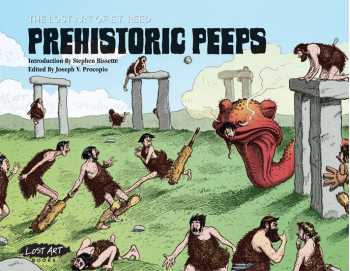 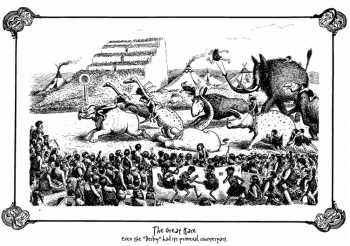 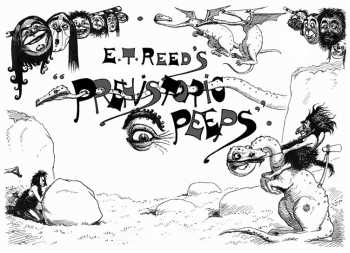 It was in 1893 that cartoonist and caricaturist E.T. Reed stumbled upon the comic goldmine of throwing prehistoric men and dinosaurs into anachronistic situations. The mayhem that naturally ensued -- sea serpents ruining a beach party, jockeyed dinosaur races, primitive art critics arguing over cave paintings, beast-powered automobiles -- delighted the audiences of Punch for the next several years and inspired countless imitators in humor magazines on both sides of the Atlantic Ocean for decades. There is no arguing that a clear line can easily be drawn from Reed’s Prehistoric Peeps straight through the decades to television’s The Flintstones.

Being the pioneer of such an enduring comic concept would be enough to warrant a volume such as this, but Reed deserves further celebration for the remarkable draftsmanship he brought not only to Prehistoric Peeps but also to the voluminous output of cartoons and caricatures he produced. From his decades-long assignment as Punch‘s parliamentary caricaturist-of-record to his steady stream of editorial and socially satirical cartoons, Reed brought a level of craft to his work that bears re-examination for its own sake. These pages demonstrate that Reed could just as deftly handle the riotously packed panoramas of his Peep shows as he could the simple, defining detail in on-the-spot sketches of legislators and prime ministers.

This volume brings together all of the Prehistoric Peeps collected in Reed’s lifetime as well as an extensive gallery of his varied output for Punch magazine. Comic artist, writer, and scholar Stephen Bissette (Swamp Thing, Tyrant) contributes an introduction that tackles the entire genre of caveman-and-dinosaur comics and how they have intersected with and inspired other media since Reed kicked that first avalanche-starting boulder down the cliff. In addition, this book includes a short biography of Reed by cartoons historian Mark Bryant as well as an extensive interview with Reed himself, exploring his inspirations and working methods.