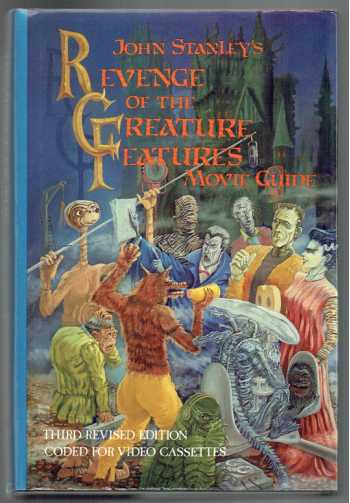 This is the third revised edition, totally rewritten and updated. This is the only hardcover edition limited to 250 copies, signed, and slipcased.Subtitled "An A to Z encyclopedia to the cinema of the fantastic." "Creature Features" host John Stanley's movie reviews of popular and cult genre films. Lavishly illustrated with photographs from the author's private memorabilia collection.

One of the many subheadings in the delightful, nattering introduction to this not-first-but-second revision of The Creature Features Movie Guide declares, "Our Book is Cheap.'' Well, cheap and cheap looking it may be, but this alphabet of thumbnail reviews of the genre that, though it includes some real classics, is usually considered the pits of the flicker industry is lots of fun and a couch-potato's necessity. Stanley, once a TV horror movie host, casts his net widely, including James Bond installments and whimsies like Popeye apparently because of the monstrous if not supernatural miens of some of their personae. His comments are straightforward rather than snide and surprisingly respectful, maybe a tad dense; for instance, he doesn't grasp that Repo Man is a comedy. ...Plenty of goofy and cheesy stills with jokey cutlines relieve the reviews' tiny print.

For 33 years John Stanley was an entertainment writer for the San Francisco Chronicle, covering the leading movie and TV personalities from the 1960s through the early 1990s. During that time he was also host of "Creature Features," an extremely popular Saturday night series in the Bay Area that ran for 14 years. (His predecessor, Bob Wilkins, hosted from 1971-1978.) Stanley's book I WAS A TV HORROR HOST (2007) reflects the large number of personalities of fantasy-world personalities he interviewed on the air, including Robert Bloch, Ray Bradbury, Leonard Nimoy, William Shatner, Ray Harryhausen, Vincent Price, Christopher Lee, William Castle and countless film directors and sci-fi/fantasy authors. Stanley (born 1940) has written 18 books during his lifetime, including six editions in the long-running "Creature Features Movie Guide" series (1981-2000)

Very Fine/Fine in a Very Fine slipcase.
#27 of 200 slipcased hardcover copies signed by the artist