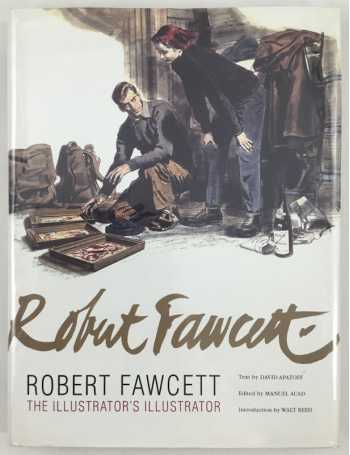 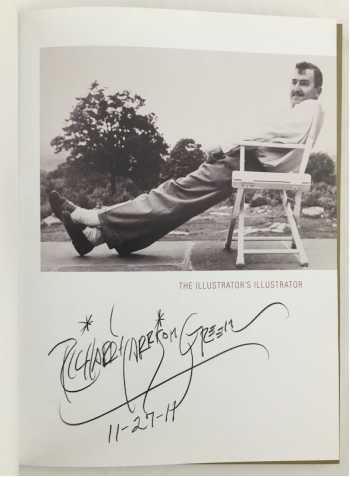 Out-of-print. This copy has the previous owner's signature of Richard Harrison Green who was a Disney animator on Rescuers Down Under, Who Framed Roger Rabbit, and Beauty and the Beast.

Robert Fawcett: The Illustrator's Illustrator is the very first book essaying the life, career and impact of this complex, even contradictory artist.

This volume features nearly 250 images, the majority of them presented in full color. It also includes various sketches and preliminary studies, as well as all of Fawcett's illustrations featuring Sherlock Holmes.

These are accompanied throughout by the insightful and nuanced commentary of David Apatoff, the foremost living authority on Fawcett's work, along with an introduction by Walt Reed, founder of Illustration House, Inc. and a personal friend of the artist.

Robert Fawcett was perhaps the most popular and celebrated commercial artist of his generation, a craftsman whose work was so highly regarded that he was crowned "the illustrator's illustrator."

An avowed socialist who fled a successful career as a fine artist in his youth, Fawcett proved to be a natural businessman whose services were sought after by the most prestigious and highest-paying magazines of his day, including Collier's Weekly, Cosmopolitan and The Saturday Evening Post.

He also wrote On the Art of Drawing, a work of such vitality and lasting worth that it remains in print to this day, while in his roles as a lecturer and an original faculty member of the Famous Artists School, Fawcett proved to be a speaker and teacher whose influence upon his both peers and innumerable students cannot be underestimated.

Fawcett accomplished that and much, much more--all despite the fact that he had received but two years of formal training in his chosen profession. And yet this Promethean talent has never before been the subject of a lengthy investigation until now.

Near Fine in Near Fine dustjacket (spine slightly cocked, mild wear to book and dustjacket)