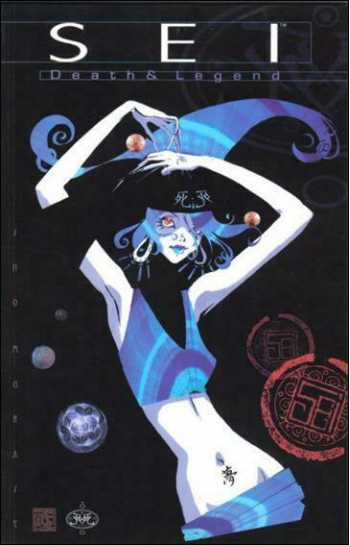 Set in the timeless world of Japanese Mythology, Sei tells the story of the uncertain origin of the Japanese equivalent of Death, the female Grim Reaper. Sei is an epic legend about love and betrayal taking place in a world of Gods, Goddesses and mythical creatures. Tsuchi, the fire goddess, tells the story of how her birth caused the death of her mother, Izanami. Izanagi is so distraught by his wife's death that he goes berserk. His desire to be reunited with Izanami brings him to the farthest reaches of the Netherlands where no mortal may fear to tread. A battle of epic proportions ensues in which mythical Japan will never be the same... but was Sei formerly Izanami, the primordial goddess and personification of the Earth and darkness...?

Even as a child, Murase made comic books. "My sister was my first reader, " she recalled.
Growing up in Barcelona, artist Sho Murase often felt like an outsider.
People were always asking, "Where are you from?"

When she went to Japan, her mother's homeland, she felt out of place, too. People were startled to hear Japanese spoken with a Spanish accent.
So when she moved to polyglot San Francisco, it felt just right.

She's got an unusual match-up of sensitivity and drive. And her artwork, which she calls a hybrid of European and Japanese influences, speaks to an international audience.

If there is a thematic through-line in her manga, it is storytelling of the heroic kind, identity stories in which a protagonist overcomes hardship to triumph.

Her stories are bound to be an inspiration -- to girls, to young artists. In fact, to anyone aspiring to be his or her own superhero.