Sign in | Register
HomeFanzinesSense of Wonder: A Life in Comic Fandom
42 of 73 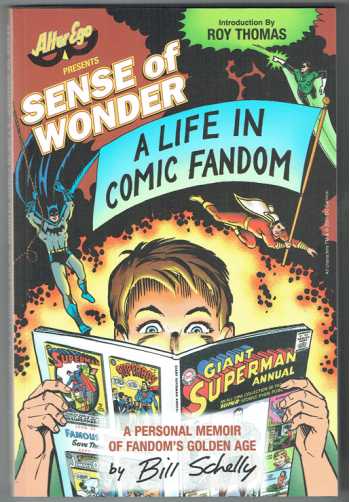 Sense of Wonder is the personal, often funny, sometimes poignant recollections of Bill Schelly's years as a comic book collector and fanzine publisher in the 1960s and 1970s.

Fandom's leading historian recounts his strange-but-true encounters with Steve Ditko, Dr. Frederic Wertham, Jim Shooter, Bob Kane and more, in this beautifully-written, highly readable text. It's all here: the fans, the dealers, the comicons, and more, including a special introduction by Rascally Roy Thomas!

"[Sense of Wonder is] charmingly nostalgic, intimate and heart-warming. Schelly's trip through the wilderness years of fandom echoes what so many of us felt when we made a magic connection with other comics fans." -- Paul LevitzFrom the back cover:"Bill Schelly has an obsessive yet intelligent passion for things many might consider marginal if not bizarre--always the mark of an interesting mind." -- Tom Robbins Fierce Invalids Home From Hot Climates"

Despite the fact that my discovery of comic books pre-dates Bill Schelly's by decades, our experiences were eerily similar. I had a vivid recall of reading Action Comics starring Superman in the late 1930s. If you've ever liked comic books, you'll love SENSE OF WONDER." -- Joe Kubert Legendary Comics Artist