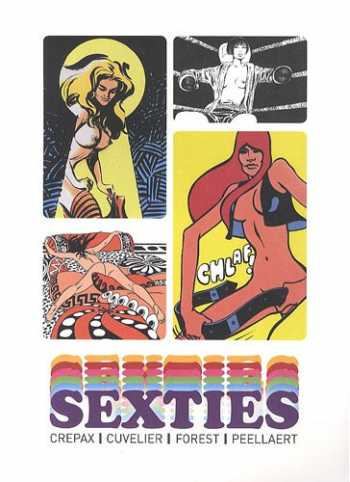 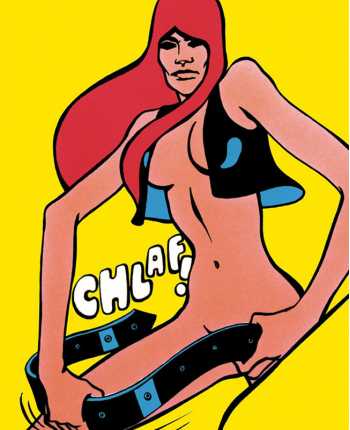 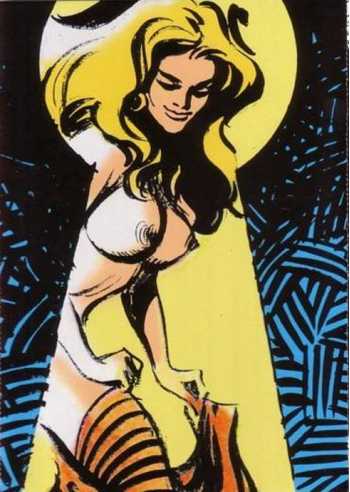 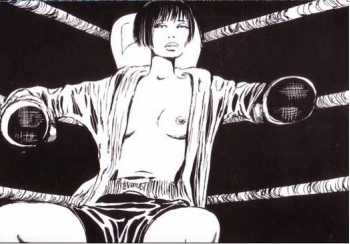 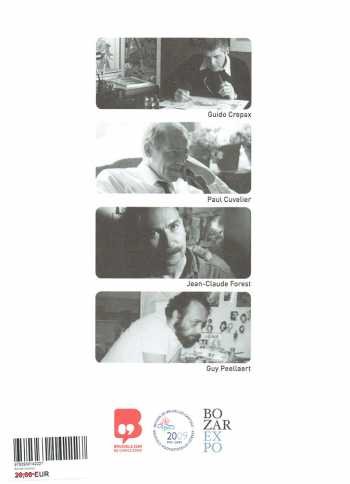 This is the tri-lingual (English, French, Dutch) catalog for an exhibition of Guido Crepax, Paul Cuvelier, Jean-Claude Forest, and Guy Peellaert.

This exhibition highlights the work of four authors who, thanks to their audacious illustrations and narratives, have been instrumental in the development of the comic strip by expanding the art form beyond the realm of children. It will take place in the impressive setting of the Centre For Fine Arts in Brussels.

In the mid-1960s, the four artists in question found their inspiration in painting (including the Pop Art movement), cartoons ("Yellow Submarine", etc.), cinema, music (anything from rock to innocent French "Yé-yé" pop), literature and photography. Through the eyes of these four major artists, the exhibition will attempt to paint a picture of an era that saw many changes in quick succession.

Guido Crepax (1933-2003), an Italian, created "Valentina" - whose physique was inspired by the actress Louise Brooks - in 1965 for the publication "Linus". Éric Losfeld, an avant-garde publisher, put out the album in 1968. Right from the start, Crepax was considered an undisputed master of highbrow eroticism. The following decade, this top-flight graphic artist would adapt, in an inimitable black and white, the great classics of eroticism: "Histoire d'O", "Emmanuelle" and "Justine". His layouts included a revolutionary narrative system consisting of stories within stories and flashbacks.

Belgian Paul Cuvelier (1923-1978) was a leading post-war Belgian comic-strip artist. His "Corentin" gives us little glimpses, from time to time, of a sensuality that would be expressed later in a more adult work. Jean Van Hamme, then just starting out as a scriptwriter, drafted "Epoxy" (1968) for the artist. In this mythological tale, Cuvelier finally and fully expressed his passion for drawing the human body, especially the female form. Indeed, drawing would remain a central part of his comic books.

In 1962, Frenchman Jean-Claude Forest (1930-1988) initiated a shockwave by creating "Barbarella" in "V-Magazine". The character, whose physique was inspired by Brigitte Bardot's, embodied modern woman during a period of sexual liberation. Seen by some as scandalous, the album that appeared in 1964 turned "Barbarella" into the first-ever "adult comic". Forests sensually drawn lines and his imagination made the strip a huge success, which was further amplified in 1968 by Roger Vadim's film (featuring Jane Fonda in the lead role). Forest himself designed the scenery for the film. As an author in his own right as well as a scriptwriter ("Les naufragés du temps" with Paul Gillon and "Ici même" with Jacques Tardi), Forest was one of the founders of adult comics.

Belgian Guy Peellaert (born in 1934) enjoyed a brief, but legendary, career in comic strips. His style, which was in keeping with the era, introduced "Pop Art" into the frames. Initially appearing in "Hara-Kiri", "Les aventures de Jodelle" (a character whose body was inspired by that of French singer Sylvie Vartan) was published as an album in 1966. Two years later, Peellaert launched a new but equally psychedelic heroine: "Pravda, la survireuse" (another French singer, this time Françoise Hardy, was the model for the character of Pravda). The artist then devoted himself to painting, a field that led him to design posters for films ("Taxi Driver"/Martin Scorsese, "Paris, Texas"/Wim Wenders, etc.), album covers ("It's Only Rock and Roll"/The Rolling Stones, "Diamond Dogs"/David Bowie), and for books ("Rock Dreams" and "The Big Room"), all of which are now iconic works of art.