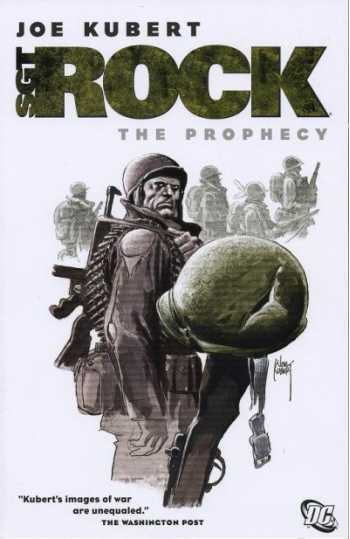 A pristine copy of this out of print graphic novel.

Rock and Easy Company parachute into Nazi-occupied Lithuania to rescue a young rabbi so they can bring him to America and make the horrors of the Holocaust known to the world.

In 2003, DC revived Sgt. Rock, a mainstay of the company's 1960s and 1970s war comics--in a book written by hard-boiled scripter Brian Azzarello. Rock returns again, with artist Kubert, the creator most closely associated with the character, writing the script, too. Rock and his Easy Company parachute into Nazi-occupied Lithuania to rescue a young rabbi, whom his sect believes is the messiah, and bring him to America, where he can tell the world about the Holocaust. Rock's unit confronts not only the expected German troops--one-dimensionally villainous as ever--but also marauding Russian soldiers and anti-Semitic Estonian villagers. Kubert's present approach falls somewhere between the naivete of the original Sgt. Rock, with the invincible topkick surviving skirmish upon skirmish unscathed, and the Azzarello version's harshness. The combat is more gruesome than ever, and the anti-Semitic persecution and concentration camps are explicitly depicted. As always with Sgt. Rock, the primary appeal lies in the dynamically expressive artwork of the now-octogenarian Kubert, who is as indefatigable as his signature character. Gordon Flagg