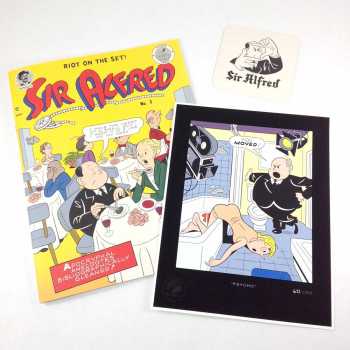 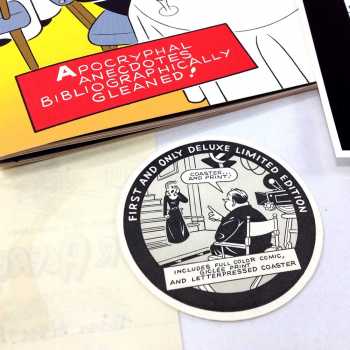 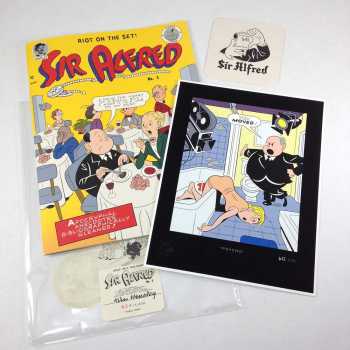 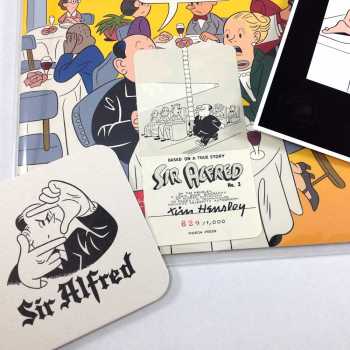 In the last months before comics impresario Alvin Buenaventura passed away, he completed publishing Sir Alfred No. 3, an oversized comic book/graphic novel by the brilliant Tim Hensley. Sir Alfred No. 3 is an oblique biography of the world's most famous film director, Alfred Hitchcock. In fact, despite being numbered "No. 3," no other issues exist. The comic book is composed of multiple gag strips based on anecdotes found in tomes of film lore in the public library and used book shops. Sir Alfred pays homage to '50s personality comics and movie tie-ins. It ends up being something of a cross between Marge Buell's Tubby, who bears an unforeseen resemblance to the famous director, and Miss Beverly Hills of Hollywood. The book includes cameos by Salvador Dali, Greta Garbo, Joseph Cotten, Joan Fontaine, David O. Selznick, Edith Head, Gregory Peck, Bernard Herrmann, Francois Truffaut and a cast of thousands. It should be emphasized that Sir Alfred No. 3 is more than just a comic book, it is a signed and numbered, limited edition bundle that was produced with a variety of printing processes including offset, letterpress, and giclee printing, as well as blind embossing, handstamping, and diecutting. Each copy of this strictly limited and signed/numbered edition of 1000 comes with a correspondingly numbered giclée print suitable for framing and a custom beverage coaster, all packaged in a mylar sleeve.

Out of print. This copy is number 622 from an edition of 1000 copies. All extras are present and in Very Fine condition.