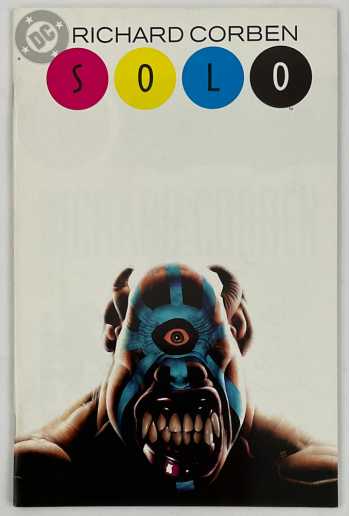 The Richard Corben issue of this series edited by Mark Chiarello.

Four stories written by Richard Corben and one by John Arcudi. Art and cover by Corben.

The series spotlighting the singular vision of top artists continues with an issue by Richard Corben (HELLBLAZER: HARD TIME, THE HOUSE ON THE BORDERLAND) featuring five horrifying tales of terror, suspense, intrigue and action! Corben brings life to a mummy in ancient Egypt, takes us into the trenches of a futuristic war, straps on a six-shooter for a good old- fashioned western, and then brings about the plague! And as if that isn't enough, Corben teams up with writer John Arcudi for a not-so-solo story of the Spectre, Jim Corrigan! SOLO #2 is an engrossing, enthralling anthology brought to you as only Richard Corben can! Cover price $4.95.