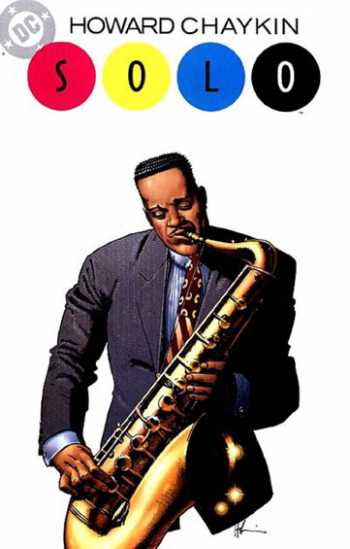 The Howard Chaykin issue of this series edited by Mark Chiarello. Entirely written and illustrated by Chaykin. 48 pages. No ads.

Howard Chaykin goes it alone in SOLO #4! Taking a page from William Gaines' E.C. Comics, Chaykin delivers six spine-tingling and thought-provoking tales guaranteed to entice and entertain! Chaykin revisits the old West in "Tall in the Saddle;" heads to the future in the science-fiction epic "Upgrades;" plays a World War II jazz tune in "The Last Time I Saw Paris;" shows the terror of urban violence with "Bad Blood;" and infiltrates the spy genre with "Breaking and Entering." Chaykin even guest-stars in his own story, the autobiographical yarn simply titled "Horrors." Turn the pages if you dare ? it's time for Howard Chaykin to go SOLO!