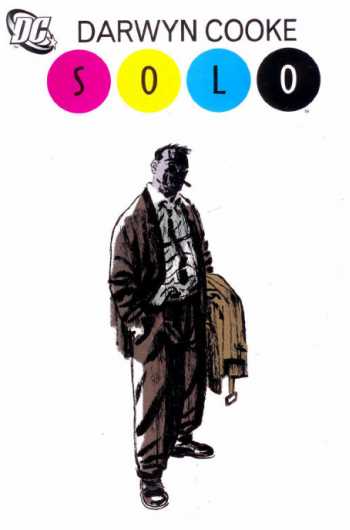 The Darwyn Cooke issue of this series edited by Mark Chiarello. Entirely written and illustrated by Darwyn Cooke. 48 pages. No ads.

Fan-favorite writer/artist Darwyn Cooke (DC: THE NEW FRONTIER, CATWOMAN) takes the reins in SOLO #5, telling a series of enthralling stories in his uniqye style! Saddle up to the bar and grab a stool next to Slam Bradley, as the down-on- his-luck P.I. guides you through some of the craziest tales he's ever heard. Thrill to the adventures of King Faraday in Cuba, dig the Question's Middle Eastern math lesson, and attempt to understand a geek's growing passion for his vacuum cleaner. And Slam's stories end with a bang, as he spins a revenge yarn featuring Batman!