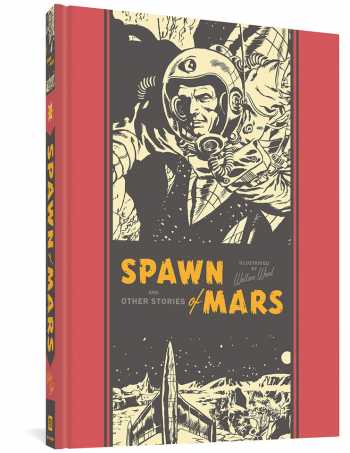 The science fiction genre owes a debt, especially visually, to EC Comics, and this highly anticipated Wallace Wood EC science fiction comics collection shows why. It features over two dozen comics stories drawn in Wood's meticulously detailed brushwork (his "lived in" spaceship interiors helped inspire Star Wars' Millennium Falcon). And with titles like "Spawn of Mars," "The Dark Side of the Moon," "A Trip to a Star," "The Invaders," "The Secret of Saturn's Ring," and "The Two-Century Journey," how can you go wrong? Like every book in the Fantagraphics EC line, Spawn of Mars and Other Stories features essays and notes by EC experts on these superbly crafted, classic comic book masterpieces.

"Wood's detail-laden panels, vibrant brushwork, and chiaroscuro lighting effects gave his stories a verisimilitude that the primitive cinematic special effects of the era sorely lacked; no Hollywood budget could replicate his intricate spaceships and other futuristic machinery or his imaginatively slimy bug-eyed monsters." --Gordon Flagg

"Spawn of Mars is how you do a classic comic collection right. Not only are the stories collected here all extremely entertaining, but they also showcase one of the genre's most prodigiously innovative talents at the height of his powers. ... Fantagraphics has done the literary world a great service with their collections, this one included. Anyone even remotely interested in classic science-fiction - pulp or otherwise - will find themselves in pure heaven picking them up." --Trent McGee

Wallace Allan Wood (1927-1981) rebooted Marvel's Daredevil, designing the iconic costume that recently appeared on the smash hit Netflix series. He was one of the best and funniest cartoonists of the earliest iteration of Mad magazine and, thanks to his work on the EC Comics line, he is also widely considered one of America's greatest science-fiction cartoonists. With his magazine anthology witzend, he helped pioneer underground/independent comics publishing.