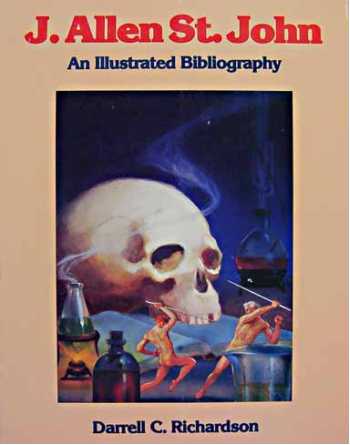 The primary reference on this artist.

Though not generally recognized in the art world as the superlative illustrator and artist some critics know him to be, J. Allen St. John is not unknown.

Beginning shortly before World War I after the publication of his first Tarzan illustrations, he attracted wide attention in the science fiction world. Many fans and collectors in this field became avid devotees of St. John and have continued this interest for decades.

However, St. John hs always been recognized for his versatility and received  considerable renown as a portrait artist in New York while still a young man. The early years of this century were the golden age of illustration. Howard Pyle's Brandywine School was turning out artists like N.C. Wyeth, Frank Schoonover, and Randall Parris. St. John was a contemporary of these artists. He began working in 1898 and died in 1956.

St. John studied at Art Student's League of New York under William M. Chase, Carroll Beckworth and Kenyon Cox. Later he studied in Paris with Jean Paul Vierin. He moved from New York to Chicago early in his career and lived there the rest of his life. For twenty years he was Instructor of Painting and Illustration at the Chicago Art Institute.  Then he became Professor of Life Drawing and Illustration at the American Academy of Art.

During all these Chicago years while he taught art, he lived with his wife, Ellen, in the Tree Studio on East Ontario Street, and he continued to paint, draw and illustrate.

Here for the first time is presented a bibliography of this beloved artist's work, along with two hundred examples  of his art. It is the result of over forty years of dedicated research.

St. John lives on in the work he left behind, and in its power to stir the imagination of man and transport the human spirit form the everyday world to the unlimited realm of the stars in all their magic and glory.

I have admired the art of J. Allen St. John since I first saw a sample of his work when I was eight years old. I was charmed by his illustrations while reading THE BEASTS OF TARZAN.  I never lost my interest and over the years I have continued to search for and collect every one of his illustrations I could find.

Early on I managed to acquire all the Tarzan, Martian, Pellucidar, and other stories by Edgar Rice Burroughs. These were, of course, profusely illustrated by St. John. By the time I was a teenager in the 1930s I had begun to locate titles by other writers with St. John art. Later, when I began to collect pulp magazines I added more St. John illustrations to my collection.

My younger brother, Haskell, took a liking for St. John even before he was old enough to start to school. He maintained his interest through the years. It may have been one of the prime reasons why he decided to be an artist. He never wavered form this aim and after finishing college, he studied at the American Academy of Art in Chicago. Here, he met in person, his idol, J. Allen St. John, one of the professors. Haskell spent his entire career as a professional artist.

This book is not a biography or a critical work on J. Allen St. John. Such a book is now in preparation and is scheduled for publication in the near future. I have been gathering information and collecting illustrations for this project for nearly fifty years. Facts about his life and work and critical appreciations are reserved for the forthcoming book.

Beginning soon after I discovered St. John, I started to compile a list of the books and magazines containing his work. The list grew as I located additional art. I did not attempt to compile a real bibliography until 1950. It came about in this manner.

I had heard for years that St. John was living in his old studio-apartment in Chicago. He was not visited by fans and collectors. He had the reputation of being something of a recluse and had not responded to the letters of fans. I decided to beard the old lion in his den. I lived in Fort Mitchell, Kentucky at this time, and Chicago was only a day's drive away. That first evening in Chicago I went to the American Academy of Art, with my brother Haskell, who was a student there. St. John then taught evening classes at the Academy. We went to the office of the President, Frank H. Young and arranged to meet Professor St. John. Mr. Young took us to the class room where he was teaching a class in Life Drawing. After a friendly and lively conversation, he invited us to visit him in his studio the next morning.

This visit established an enduring friendship. The visit and interview resulted in information which was later used for several articles I wrote on the great artist. He invited me back the next day to show me some of the original art still in his possession. This resulted in the purchase of several pieces of his original art. However, there was another development.

He showed me his special portfolio, a huge leather bound scrap book, filled with samples of his work. He used this to show editors, publishers and clients examples of his published art. It contained nearly a hundred samples of his work, mostly clipped from books and magazine stories. There were several samples of his advertising art, none of which I had ever seen or hear of before. A lot of the displayed book jackets, magazine covers and illustrations were familiar to me. Many, however, were unknown to me or other collectors. I hurriedly took notes as we leafed through the pages of this fantastic portfolio. Often the source of the illustration was not evident. I asked about these and wrote information quickly in my notebook. Even so, my notes were far from complete. Later that night, my memory supplied some pertinent data. I intended, hopefully, to take another look at the portfolio during my next visit. It never happened. Even so, information gleaned at this time furnished information that forms the heart of this bibliography. It was at this time that I decided to eventually od a bibliography of my favorite artist. It was a year before I saw St. John again. In the meantime I had purchased several more paintings form him and we had exchanged several letters. We again had a splendid visit and much stimulating conversation. I had exploded the theory that he was a recluse and found him to be an affable, friendly and charming gentleman of the old school. He was erudite, widely read, and seemed at home in almost any field of knowledge.

However, the most important episode this day was my opportunity to examine a special book case containing books which had been illustrated by the artist. Though not nearly complete, it provided much of the basic information found in this book. Many of the books lacked a jacket, many of which had been lost, given away, or used for promotional purposes. In several instances St. John did only the art for the jacket and no interior illustrations. Thus, if you saw the book you would have no way of knowing that he did the jacket. Had he not pointed it out for me at this time, I would not have known that he painted the jacket for certain titles. This was a truly red letter day for me in my quest for information about St. John's art.

The next day I fulfilled one of the main objectives of this trip to Chicago. I visited the offices of the A.C. McClurg Publishing Company. St. John had arranged for me to see a friend at the company, R.W. Barber, who was the current keeper of the archives. He took me to a small room on an upper floor next to the vaults. Here in three medium size old book cases with glass doors were to be found all that was left of the archives of books published by A.C. McClurg. The curator explained to me that the collection was far form complete. Many books had been lost or stolen through decades of publishing history. I was appalled at the indifferent care that had been given to these important archives. It should be pointed out that A.C. McClurg had for many years ceased being a publisher and was a book distributing agency. They did, however, maintain copyrights and handled royalties and reprints of their published titles going back for generations.

I was left alone in the archives where I spent three very interesting hours. I looked at every book in the three old bookcases. Many books were without jackets. Some were in excellent condition and some were worn and in rather poor condition. I took notes as I looked through the shelves. I found many books illustrated by St. John that I had never seen before. I was careful to record dates, number and type of illustrations and pertinent bibliographical information as I went along. Naturally, I observed many titles which I already knew about and a large number which were in my collection.

I paused to examine rare and interesting books not illustrated by St. John which appealed to me. I made note of a number of these which I later searched for and added to my library.

Of the many Burroughs titles published by McClurg fewer than twenty were still to be found in these shelves. Some of these had jackets and some did not. Looking at a copy of THE SON OF TARZAN, I discovered that the McClurg jacket wa a wrap around painting. Previously I had only seen the Grossett & Dunlap jacket which printed only half of the St. John picture. There were other interesting discoveries similar to this one.

All in all, the research done on this eventful day at McClurg, and the day before in St. John's own library provided the basic information which has formed this bibliography.

All other lists or partial bibliographies of St. John by other collectors or writers have been copied from this original research. This is not to discount the research of many other people who have contributed to the knowledge of his art. Through the years, one by one, and sometimes by the score, St. John illustrations have been located by numerous fans and collectors who love his art. I am grateful for the contributions of these friends. It has finally made possible the publication of this bibliography.

It is my hope that this bibliography will prove useful to fans, collectors, researchers, scholars and all those who admire the art of J. Allen St. John.