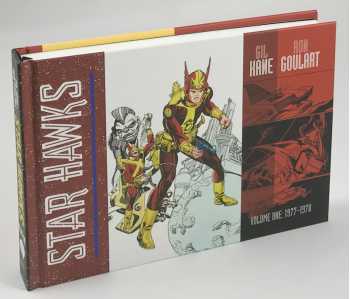 The classic 1970s science fiction newspaper strip created by Ron Goulart and Gil Kane is coming back in a big way. The only comic strip to be produced in a two-tier format, the Library of American Comics edition will reproduce each strip on its own page so readers can relish Kane's incredible achievement. Nearly 40 years after its debut, Star Hawks still looks fresh and exciting. This first of three volumes reprints more than 300 double-sized strips and includes an introduction by Ron Goulart.

Ron Goulart was born in 1933 and published his first science fiction story while still a teenager. He's well-regarded for his histories of pulp magazines (Cheap Thrills) and comics (The Adventurous Decade) and is a prolific fiction writer under his own name and various pseudonyms.

Gil Kane (1926-2000) is considered one of the best comic book artists of the Silver Age and beyond, having won four awards from the National Cartoonists Society--including Best Story Strip for Star Hawks. During his long career, he is best known for his work on Green Lantern and The Atom for DC Comics, and then a long stint at Marvel, drawing the Amazing Spider-Man and hundreds of covers in the 1970s.