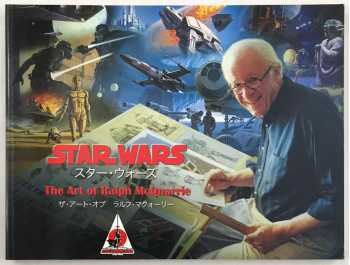 Star Wars: The Art of Ralph McQuarrie is a 168-page, full color oversize paperback created to commemorate the 30th anniversary of Star Wars in Japan. Authors Stan Stice and John David Scoleri have compiled a book that contains nearly all of Ralph's Star Wars art from their critically acclaimed The Art of Ralph McQuarrie, along with dozens of newly discovered, never before published production pieces from Star Wars, The Empire Strikes Back, and Return of the Jedi.

The Art of Ralph McQuarrie made it's debut at Star Wars Celebration IV in Los Angeles in May 2007. "We were thrilled at the reception the book received. While we were happy to finally make so much of Ralph's artwork available to his fans, certain limitations resulted in several of Ralph's most famous and recognizable Star Wars paintings not making the final cut," Scoleri said. A veteran of all 5 previous Star Wars Celebrations, Stice noted, "We saw the opportunity to do something special for Ralph's Japanese fans while celebrating the 30th anniversary of Star Wars in Japan. By designing a book that focused exclusively on Ralph's Star Wars art, we were able to not only carry over the majority of the Star Wars art from the original volume, but add in many of the pieces we didn't originally have the space for."

The Japanese book also provided an avenue for additional recently uncovered Star Wars artwork. "Ralph's furnace went out and needed to be replaced," said Stice. "In the process of clearing out the space for the workmen to replace it, I came across a folder containing pages and pages of never before seen drawings from the making of Star Wars and The Empire Strikes Back. Our book had only been out a few months, and here we stumbled across a treasure chest of illustrations that had been forgotten for nearly 30 years."

The inclusion of the new and previously omitted artwork expanded the book by almost 30 pages, making this a must have for all fans of Ralph McQuarrie and the art of Star Wars.

The text is entirely in Japanese, allowing Ralph's fans in Japan to read his personal commentary on his amazing body of Star Wars artwork for the first time.

Near Fine (mild flaring at the corners of the covers, light shelfwear, very flat, tight, clean)
Limited to one printing of 1978 copies