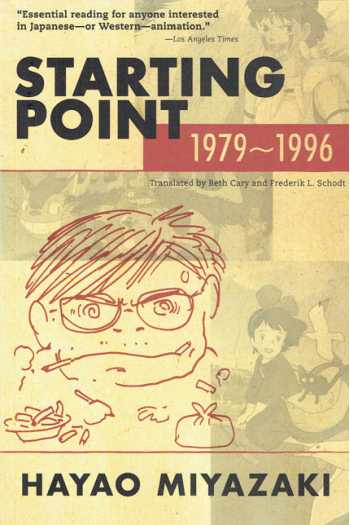 The first of a pair of memoirs in collection form, featuring essays, interviews, and even a brief comic on the history of airline food, from the master animator.

In the first two decades of his career, filmmaker Hayao Miyazaki laid the groundwork for his legendary movies. Starting Point is a collection of essays, interviews, and memoirs that go back to the roots of Miyazaki's childhood, the formulation of his theories of animation, and the founding of Studio Ghibli. Before directing such acclaimed films as Spirited Away, Miyazaki was just another salaried animator, but with a vision of his own. Follow him as he takes his first steps on the road to success, experience his frustrations with the manga and animation industries that often suffocate creativity, and realize the importance of bringing the childhood dreams of the world to life.

Starting Point: 1979-1996 is not just a chronicle of the life of a man whose own dreams have come true, it is a tribute to the power of the moving image.

Hayao Miyazaki is one of Japan's most beloved animation directors. In 2005 he was awarded the Venice International Film Festival's Golden Lion Award for Lifetime Achievement, and his Studio Ghibli received the festival's Osella Award for overall achievement in 2004. Miyazaki's films include Spirited Away, winner of the 2002 Academy Award® for Best Animated Feature Film, as well as Castle in the Sky, My Neighbor Totoro, Kiki's Delivery Service, Princess Mononoke, Howl's Moving Castle, and Ponyo, all of which have received great acclaim in the U.S. Miyazaki's other achievements include the highly regarded manga series Nausicaä of the Valley of the Wind and Starting Point: 1979-1996, a collection of essays, interviews, and memoirs that chronicle his early career and the development of his theories of animation. Both are published in English by VIZ Media.