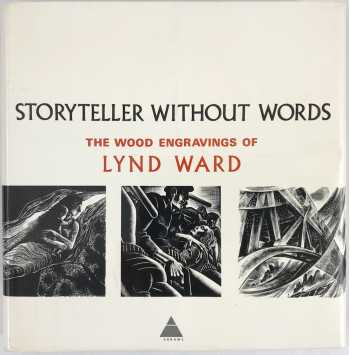 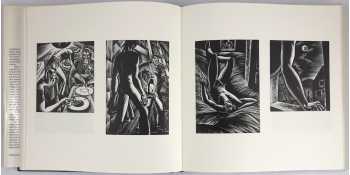 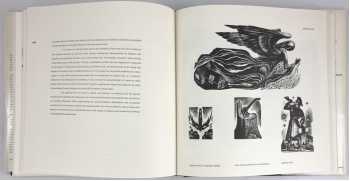 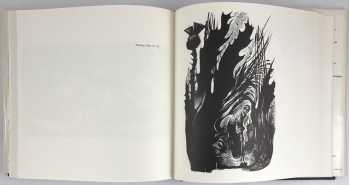 This massive book is the major monograph on Lynd Ward, collecting his six novels-in-woodcuts, other book illustrations, and prints, with a text by the artist, and a bibliography of books written and illustrated by Ward.

Larger reproductions than the Library of America books currently in print.

Lynd Ward is a master in the art of the woodcut and wood engraving, and has given these traditional graphic media a new vitality in the modern age. During nearly half a century he has produced an outstanding body of work, remarkable for its technical excellence, richness of expression, and narrative power.

After art studies in the United States and in Leipzig in the mid-1920s, Ward began concentrating on the woodcut and exploring its possibilities. He soon found that what interested him most was pictorial narrative--a story in picture--and eventually executed several "novels in woodcuts," as he named them, which, except for major chapter headings, are told entirely in visual terms. The first of these novels was Gods' Man, the story of a young artist, published in 1929, it was followed by five other narratives. In these stories, Ward succeeds in communicating in pictorial language not only specific situations but even the feelings of his characters. His style is dramatic and expressive, relying on strong contrasts of black and white for the desired effects. The test for a pictorial narrative is whether it can be understood without words, and Ward's work passes this test admirably.

In addition to creating his own pictorial novels, Lynd Ward has illustrated many books by other writers, including Goethe's Faust, Faulkner's A Green Bough, and Mary W. Shelley's Frankenstein.

For this unique volume of Ward's work, the artist himself has supervised the design of the book and has contributed the text, describing his methods of working, the history of woodcuts, and the goals of his art. The beautiful, large-scale plates reproduce the six narratives in their entirety, and also include bookplates, greeting cards, and a large selection of individual prints, many published for the first time; the work represented spans more than forty years, coming up to the present. This is a major book for anyone interested in the graphic arts.

Lynd Ward (1905-1985) illustrated more than two hundred books for children and adults throughout his prolific career. Winner of the Caldecott Medal for his watercolors in The Biggest Bear, Mr. Ward was also famous for his wood engravings, which are featured in museum collections throughout the United States and abroad.