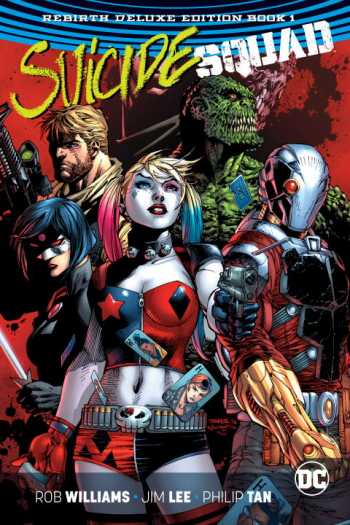 The Rebirth Era SUICIDE SQUAD tales are collected in hardcover for the first time ever here in SUICIDE SQUAD: THE REBIRTH DELUXE EDITION BOOK 1!

Separately, they're an FBI "most wanted" list come to life. Together--under the command of the iron-willed Colonel Rick Flag and the indomitable Amanda Waller--they're one of the world's most effective fighting forces, ideally suited for the brutal but necessary jobs that are too dirty for regular superheroes. They are the top-secret operatives of Task Force X--the Suicide Squad. And they're about to welcome a brand-new member.

When Waller orders her team to recover an object known as the Black Vault from enemy hands, the Squad has no idea that within its opaque depths lurks the genocidal Kryptonian madman whose power and rage nearly took down Superman himself--General Zod.

Beyond the challenge of subduing its newly acquired captive, however, Task Force X faces even greater dangers from the sinister sphere that once contained him. As its dark energies begin to wreak havoc on the team's sanity, only its craziest member, Harley Quinn, is able to resist its insidious influence. But can one newly sane psychologist single-handedly stop the madness of the Black Vault, defeat Zod and keep the Suicide Squad from living up to its name?