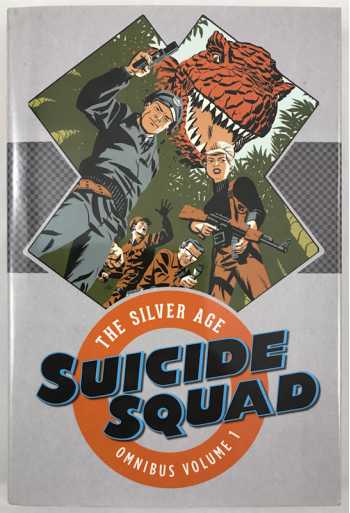 This omnibus reprints over 300 pages of never-before-collected material from 1959 to 1966. Discover the great, silly soldiers vs. dinosaurs comics that became known as The War That Time Forgot.

The stories are written by Robert Kanigher with art by the team of Ross Andru and Mike Esposito. Joe Kubert provided the art for one story as well as several covers. The final story is written by Howard Liss with art by Gene Colan.

When a large wave carrying a heated object capable of destroying anything in its path appears, the authorities throw everything they have at it to stop it from making landfall. When all other options are exhausted, the U.S. calls in their new team, Task Force X, led by Rick Flag!

Dinosaurs have long been an irresistible draw to children of a certain age. But what's cooler than a dinosaur? A giant dinosaur. A giant dinosaur battling a handful of brave soldiers? Even better.

The 1960s were a tumultuous and stressful time. During that era, the original Suicide Squad--Rick Flag and his team of regular guys (and one woman)--stood between monsters and mankind. Their stories flourished during an era of social upheaval, when there was always a reader for a story in which someone small and brave could succeed against the big scary monster.