Sign in | Register
HomeNew ArrivalsSuperman for All Seasons: The Deluxe Edition (2014) First Printing
1179 of 1646 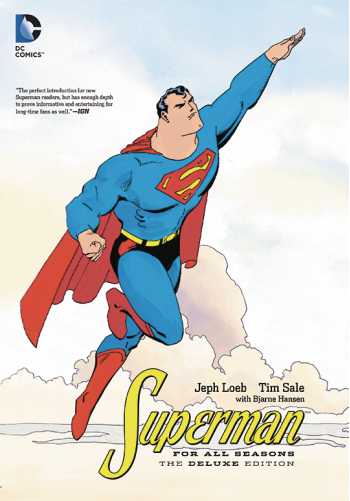 Collects Superman: For all Seasons #1-4.

In this coming-of-age tale witness the experiences and adventures that transform a simple country boy into the world's greatest hero. Told through the course of four seasons in the Man of Steel's adolescent life, it illustrates that it is the person, not the powers, that makes Superman a hero.

The catalyst for the "Smallville" television program, SUPERMAN FOR ALL SEASONS is emotional and insightful, humanizing the alien from another planet so that he is not only realistic but also relatable. It also features in-depth characterizations of Lana Lang, Lex Luthor, Lois Lane and the Kents. From the creative team of Jeph Loeb and Tim Sale, the New York Times team behind BATMAN: THE LONG HALLOWEEN, comes their take on the early days of the Man of Steel.