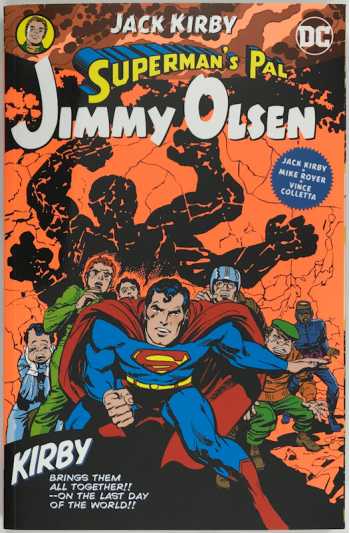 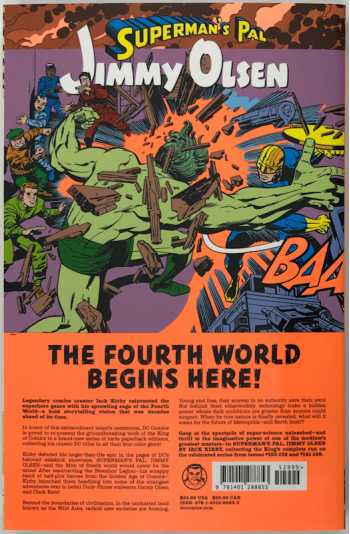 Jack Kirby's legendary take on Superman's best friend, Jimmy Olsen, is now collected in its entirety for the first time ever, with this graphic novel that features stories introducing some of the most memorable DC characters ever, including Darkseid! Follow the adventures of Superman's best pal, Jimmy Olsen! Featuring Jimmy in his own adventures and also featuring the Man of Steel himself, this phenomenal series introduced characters such as Darkseid, Mister Miracle and Orion! Writer and illustrator Jack Kirby used this book as a platform by which to launch his Fourth World creations, leaving a handprint on the DC Universe for years to come!

Jack King Kirby's comics career began in 1937 and continued for nearly six decades. With partner Joe Simon, Kirby first made his mark in comics in the 1940s by drawing and/or creating numerous features for DC Comics including Sandman, The Newsboy Legion and Manhunter, and for Marvel including Captain America, The Young Allies and the Kid Commandos. As the most valued team in comics, Simon and Kirby went on to create titles and concepts including Fighting American, Boy's Ranch and the creation of the romance comics genre. In 1961 the first issue of Marvel's FANTASTIC FOUR cemented Kirby's reputation as comics' preeminent creator, and a slew of famous titles followed that elevated him to legendary status, including Incredible Hulk, Avengers and X-Men. Kirby returned to DC in 1971 with his classic Fourth World Trilogy, which was followed by The Demon and Kamandi. Kirby continued working and innovating in comics until his death in 1994.