Sign in | Register
HomeNew ArrivalsSurf's Up: The Art and Making of a True Story 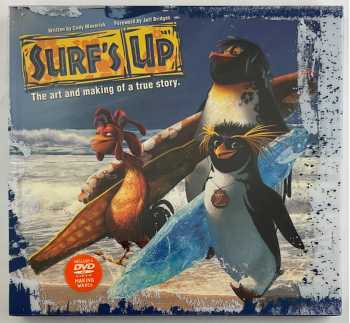 Surf's Up , the latest CG-animated feature film from Sony Pictures Animation, is based on the "true story" of up-and-coming surfer Cody Maverick. The film follows Cody as he enters his first professional surf competition. Inspired by the legendary wave rider Big Z, Cody leaves his family and hometown of Shiverpool, Antarctica to travel to Pen Gu Island for the Big Z Memorial Surf Contest. Cody believes that fame and fortune will bring him the admiration and respect he craves, but when he meets a washed-up old surfer named Geek, Cody begins to understand that the greatest champion isn't always the one who comes in first.

Get an inside look at the making of this incredible film in Surf's Up: The Art and Making of a True Story, which is packed with a wealth of extras, including a DVD that details the digital image-making process, a teaser movie poster, a booklet on "Building a Digital Wave," vintage surfer postcards, a surfbook bookmark, and a commemorative Pen Gu Times newspaper.

Surf's Up is directed by Ash Brannon (Toy Story 2) and Chris Buck (Tarzan).