Sign in | Register
HomeNew ArrivalsTales from the Crypt: The Official Archives 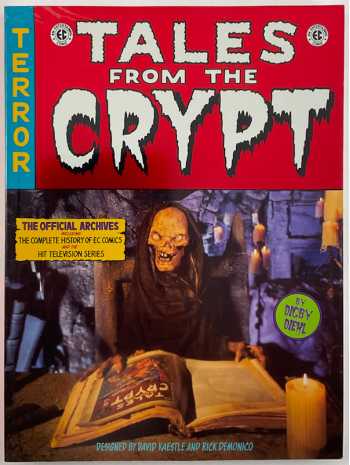 The complete history of Tales from the Crypt in comics, film & television. And it includes a never-before-published Jack Davis EC horror story! "The Mother" which was intended for the b&w Shock Illustrated #4.

Open the vault and relive the experience!

For forty-seven years the Crypt Keeper and Tales from the Crypt have captured the imaginations and scared the wits out of people with their ghostly stories and grisly visions. Here, finally, is the book that looks back fondly on all glorious gore, the ultimate coffin table book that includes:

-a pictorial "filmography" of the award-winning HBO and Fox Television series featuring credits, synopses, and at least one "terrorific" picture from every episode

-four original (and complete) stories by Jack Davis, Al Feldstein, Graham Ingels, and Jack Kamen reprinted from the actual art and reproduced in color in their original size

-brief biographies and portfolios of the key EC artists

-collectible section highlighting the coolest and most valuable Crypt merchandise