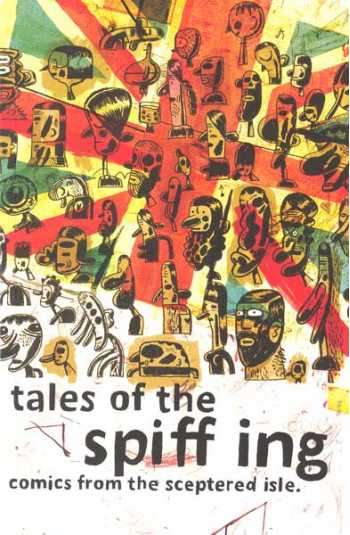 An anthology of short comics and art by the amazingly talented artists at Aardman Animations studios, Bristol, who would normally be in a darkened room with some plasticine, but in this case have been coaxed out to tell some stories of their own. With a foreword in comic form by Peter Lord (co-founder of Aardman).

"Tales of the Spiffing", is a comic anthology by a group of animation artists who work at "that" stop motion place in Bristol, UK. You know the one...wacky inventor and his sidekick dog?

Anyway, 22 of them decided to get together and use the spare time that none of them have to come up with short stories about Auld Blighty, the British translation for "Great Britain".

Back in 2010, a couple of the story artists at Aardman thought it was a bit...strange...that other studios had comics drawn by them in their own time. Questions were asked. Where is this spare time that they all had? Would anyone else be interested in making one? Would anyone be interested in BUYING one if we did manage to make it?...Come to that, how do we even make a comic?

Answers were found to all these questions. We found spare time, twenty other people were interested, people did make pre-orders, and we did our research into comics. We read a lot of them. And then we figured out how they did it, so that we could figure out how we’d do it. Eventually, we couldn’t figure out why we shouldn’t do it...so we did it.

And “Tales of the Spiffing” was born.

Originally it had a working title of “The British”, but that was a bit obvious, given that the theme of the book was British-ness and there was a massive Union Jack on the cover (Luis Cook’s brilliant interpretation). It was declared, after a vote, that it should be known as, “Tales of the Spiffing”, which gave rise to the artists involved becoming known as SPIFFING ARTISTS.

And so there you have our history. “Tales of the Spiffing” is our first foray into the world of publishing, printing, comic-conning and for a number of us, illustrating a comic.

Very Fine
One of 1000 numbered copies.