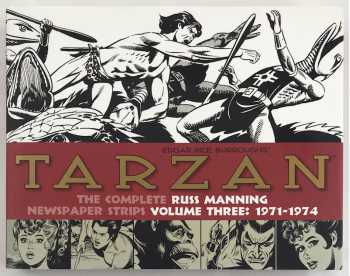 Russ Manning drew some of the most beautiful romanticized idealized males and females in comic strip history, so it was only right that he draw Tarzan and Jane.

This was the first of the four volumes to slip out of print, with Vol. 1 and Vol. 4 following suit.

This third volume of a four-book series collecting the entire run of the Tarzan newspaper strip by Russ Manning presents the final two, complete daily storylines, plus four extended Sunday adventures. In the dailies from August 2, 1971 through July 29, 1972, Tarzan returns to the Earth's core, while Korak plays guide on the dangerous white water river. In the Sundays from January 24, 1971 through March 17, 1974, Tarzan travels to Pal-ul-don and Korak enters the City of Xuja.