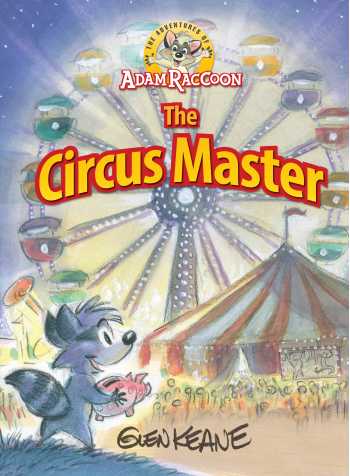 The Circus Master is part of the Adventures of Adam Raccoon series written and illustrated by Glen Keane!

Adam Raccoon leaves his comfortable home in Master's Wood and runs away to join the circus, where he eventually finds himself regretting his decision.The Adventures of Adam Raccoon series has been described as Curious George meets Aslan from Narnia. Kids will love getting to know Adam Raccoon and identify with the challenges and choices he makes as he encounters life in the Master's Wood. Along the way Adam makes some mistakes, but he always gets back on track, often with the help of his best friend, King Aren. Each of the stories in the series, like parables, are designed to be earthly pictures with a heavenly meaning.

He joined Disney in 1974 where he trained under Walt Disney's legendary animators Ollie Johnson, Frank Thomas and Eric Larson. Glen began his journey animating scenes on "The Rescuers" before being promoted to directing animator on "The Fox and the Hound". Glen is the recipient of the 1991 National Cartoonist Society Animation Award, 2008 Windsor McCay Award for Lifetime Achievement in Animation, the 2012 Tex Avery Award, and was a 2013 Disney Legend Award honoree for his contribution in Animation.

In the spring of 2012, Glen decided to leave Disney in pursuit of further artistic exploration and launched Glen Keane Productions. The following year, Keane created "Duet", a hand-drawn interactive film, for Google's Spotlight Stories. He continues to create his personal projects that push the boundaries of animation.