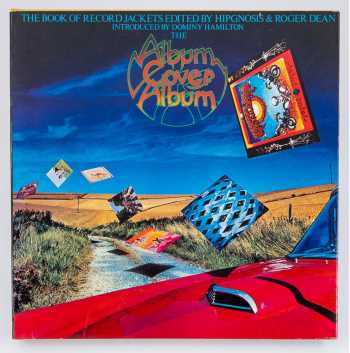 Album cover graphics and design and a nostalgic trip through the 70s. This is the relatively scarce hardcover edition. If you are a fan with the paperback edition, here's your upgrade!

It's all here - a comprehensive presentation of the unabashed artistry of a dynamic, musical world in The Album Cover Album. You'll find a survey of the earliest record jackets of the great jazz artists. And a complete collection of all the memorable jackets of the rock era of the sixties and seventies, when the art of the album cover finally came into its own. All the work of ten of the most prominent album cover artists is discussed, with the artists picking their favorites from their own work. And there's much more, making The Album Cover Album a complete and fascinating guide to this unique artform.A stunningly designed review of the greatest album cover designs, spanning the classic period from the 1950s to the 1970s, Album Cover Album first hit the bestseller charts in 1977. This led to the release of six follow-up hits, inspired a host of imitations, and generated a long-playing sub-genre in art and design publishing.Album Cover Album is edited and compiled by two designers who were among the most innovative pioneers of the work that it celebrates. Storm Thorgerson's Hipgnosis earned world renown for the epic photo shoots and iconic designs that went so perfectly with the music of Pink Floyd. Meanwhile, Roger Dean's dreamscapes and unique typography became as much a part of the rock generation as the Yes albums they adorned. Album Cover Album features their selection of more than 600 sleeves, and showcases the astonishing diversity and excellence of design that the medium produced in its first three decades.