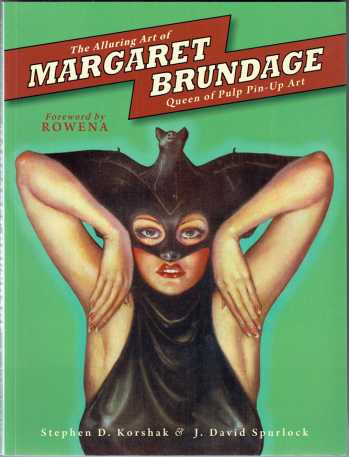 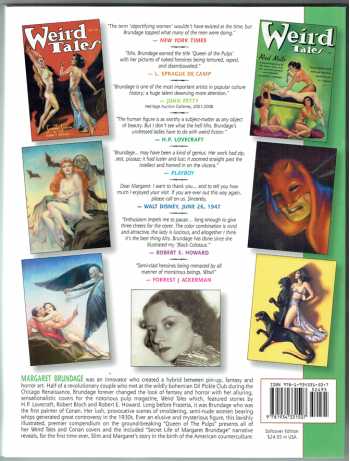 Starting in 1932, Margaret Brundage, wife of leftist revolutionary Slim Brundage, -- who she met at the wildly-bohemian Dil Pickle Club during the Chicago Renaissance -- forever changed the look of Fantasy and Horror with her alluring, sensationalistic covers for the legendary pulp magazine, Weird Tales. Brundage, whose art contemporaries include Virgil Finlay and Hannes Bok, is unique as she was the first female cover artist of the pulp era. Decades before the gothic fetish craze, Brundage's lush, provocative paintings, which frequently featured smoldering, semi-nude young women bearing whips, became a focus of acute attention and controversy. At the very peak of the notorious pulp's classic run, the magazine's appeal was due as much to Brundage's covers as to the stories inside by famous authors H. P. Lovecraft, Clark Ashton Smith, Robert Bloch and Conan creator, Robert E. Howard. Long before Frazetta, it was Brundage who was the very 1st Conan cover artist. The Alluring Art of Margaret Brundage is the premier book devoted to this noted artist and features all of her Weird Tales and Conan covers.

"The term 'objectifying women' wouldn't have existed at the time, but Brundage topped what many of the men were doing,"
--New York Times ("Exhibition Recalls World of Pulp Magazines") March 14, 2012

"Mrs. Brundage earned the title 'Queen of the Pulps' with her pictures of naked heroines being tortured, raped, and disemboweled."
--L. Sprague de Camp

"Brundage is one of the most important artists in popular culture history. A huge talent who deserves more attention."
--John PettyHeritage Auction Galleries, 2001-2008

"The human figure is as worthy a type of subject-matter as any other object of beauty in the visible world. But I don't see what the hell Mrs. Brundage's undressed ladies have to do with weird fiction."
--H.P. LovecraftH.P. Lovecraft: A Life by S.T. Joshi

"Brundage was a top trash artist of her time, and she may have been a kind of genius. Her work had zip, zest, pizzazz; it had luster and lust; it zoomed straight past the intellect and homed in on the viscera."
--Playboy, Feb., 1991

Dear Margaret: I want to thank you... and to tell you how much I enjoyed your visit. If you are ever out this way again, please call on us.
Sincerely, Walt Disney, June 26, 1947

"Enthusiasm impels me to pause long enough to give three slightly dust-choked cheers for the April cover illustration. The color combination is vivid and attractive, the lady is luscious, and altogether I think it's the best thing Mrs. Brundage has done since she illustrated my Black Colossus."
--Robert E. Howard The creator of Conan to Weird Tales, May 1936

"Margaret Brundage, with her titillating pulchrinudes on the covers of Weird Tales: naked ladies being sacrificed, semi-clad heroines being menaced by all manner of monstrous beings. Wow!"
--Forrest J Ackerman from the book, Pulp Art