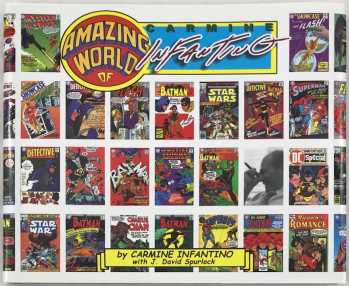 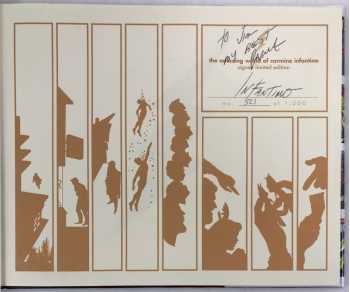 A rare copy of the signed & numbered edition of 1200 with a personal inscription from the artist: "To Jim / My Best / Carmine"

In his 60-year career, Carmine Infantino has practiced nearly every job that there is in the field of comics, for a Who's Who list of publishers. But Infantino will always be remembered as the personification of DC Comics' Silver Age. Infantino helped to resurrect the dying comics industry in 1956, as the artist who launched the Silver Age with his co-creation, the Flash, and remains the best remembered Flash artist of all-time.

Infantino proved one of the all-time, great sci-fi artists with his elegant, cityscaped Adam Strange. The only sci-fi comic to rival the sales of Adam Strange was Star Wars, to which Infantino also contributed. In 1964, Infantino became indispensable to the Batman legacy. He, with editor Julius Schwartz, saved the Caped Crusader's comics from impending cancellation with the New Look;. Infantino also redesigned the Batmobile and with Schwartz, created Batgirl.

This is Infantino's own history of comics, through his experiences, from the industry's primordial, Golden Age, through his artistic achievements, corporate years at DC Comics, and post-corporate years including his animation work, teaching, return as a top artist to DC, and Batman newspaper strip.

Fine in Fine dustjacket
#521 of 1200 numbered copies signed by the artist. Additionally, this copy has been inscribed by the artis