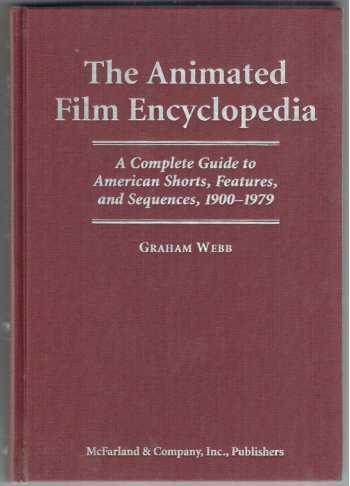 This is the original first edition of The Animated Film Encyclopedia (covering American Shorts, Features, and Sequences through 1979) and the only hardcover edition. The second edition of this book, published in 2011, goes up to 1999, but curiously with 119 fewer pages.From the publisher:In the course of its rich history, cinematic animation has developed from silent monochrome images to sound-filled shorts that ran theatrically with newsreels and aventure serials, and ultimately to prestigious feature films like Disney's Fantasia. Graham Webb's The Animated Film Encyclopedia: 1900-1979 (McFarland, 2000) is a comprehensive listing of theatrical animated cartoons through the end of the 1979, as well as significant animated sequences in live-action films. Each of the thousands of separate entries includes production information, dates, running time, and a synopsis. Full voice credits are also provided for many of the entries.