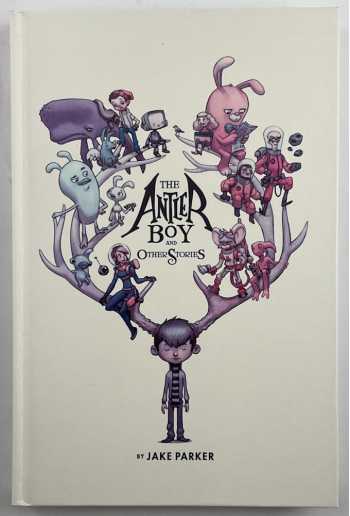 Out of print. A collection of 9 short stories written and illustrated by Jake Parker.

For the last 13 years I've been working as an artist on everything from toy commercials to feature films. For 5 years I worked in feature animation on the films Horton Hears a Who, Ice Age III, and Rio. I've also written and drawn my own graphic novel series, Missile Mouse. In between all that I've drawn several short stories which I wanted to collect in a book.

My book is called The Antler Boy and Other Stories and all of the stories were previously published in other comic anthologies like Flight or Out of Picture. Some are out of print and it'd be hard to track them all down so I thought it'd be great to collect them all in one book.

Near Fine, issued without dustjacket (light wear)
Signed and dated '13 by the artist