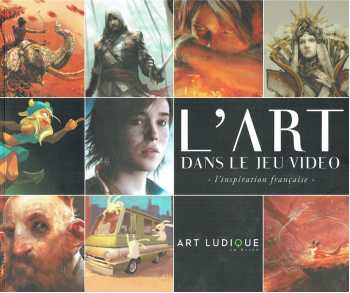 A profusely illustrated catalog to the 2015-2016 Paris museum exhibition. All text is in both French and English.

Art Ludique-Le Musée presents the first major exhibition in the world dedicated to the Art in Video Games.

Through more than 800 spectacular artworks and installations, this major exhibition will amaze a large transgenerational public by plunging them into a world filled with an incredible diversity, throughout which magnificent pencil sketches, watercolors, traditional and digital paintings and sculptures, and even animated paintings, will reveal the formidable virtuosity of the artists behind the creation of French video games.  Jean-Jacques Launier, founder of the museum and curator of the exhibition often says that in his eyes video games embody the "Total Work of Art". They require skills in drawing, painting, sculpture, at creating entire universes and hundreds of characters per game, mise en scène work, animation, storyline, music and of course, the conception of gameplays that transcends interactivity.

Experts, adepts, and newbies alike will discover the majestic artworks made for Drawing Ancient Cities and Urban Landscapes, whether they are contemporary, medieval or imaginary.

An Invitation to Journey will take visitors to stunning destinations, such as paradisiacal islands, luxuriant tropical vegetation, the misty mountains of the Himalayas and the legendary deserts of the American Far West.

Imagining New Heroes and Creatures will allow visitors to assist - from the numerous drawing studies to the final paintings and sculptures - the conception of characters of multiple horizons, such as knights, inhabitants of distant planets, mythological animals- and even the famous Raving Rabbids who will really entertain the younger ones!

Homage to the Cinematic Art will allow the public to appreciate the cultural and artistic bridge that exists between cinema and video games, through the study of sceneries and lighting that are worthy of the greatest films noirs, Hollywood action scenes, as well as the use of world-renowned actors, such as Ellen Page or Willem Dafoe, who came specially to Paris to lend their features and personalities to the artists of a French video game studio.

The superb watercolors dedicated to the creation of fairies and elves, the backgrounds of legends, enchanted castles, and even a constantly animated painting-installation of a young princess lost in limbo and guided by a ball of light, will consist of some of the fascinating artworks in Magic, Fantasy, Folktales and Fairies, which will delight both adults and children.