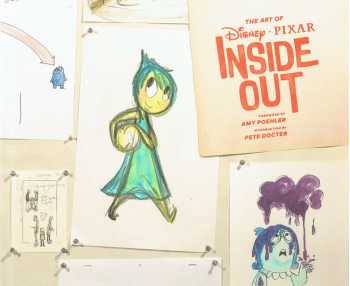 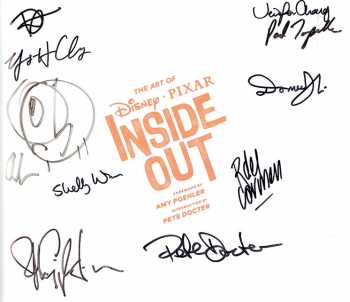 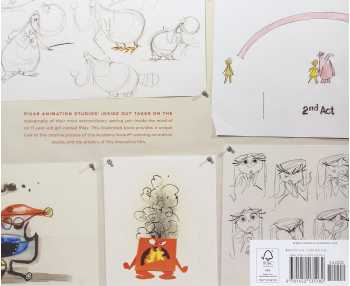 These copies of The Art of Inside Out were signed exclusively for Stuart Ng Books at the Pixar Animation Studios, Emeryville, California, on August 19th, 2015, by these artists whose work appears in the book:

From an adventurous balloon ride above the clouds to a monster-filled metropolis, Academy Award- winning director Pete Docter (Monsters, Inc., Up) has taken audiences to unique and imaginative places. In Disney Pixars original movie Inside Out, he will take us to the most extraordinary location of all -- inside the mind.

Growing up can be a bumpy road, and it's no exception for Riley, who is uprooted from her Midwest life when her father starts a new job in San Francisco. Like all of us, Riley is guided by her emotions  Joy, Fear, Anger, Disgust, and Sadness. The emotions live in Headquarters, the control center inside Rileys mind, where they help advise her through everyday life. As Riley and her emotions struggle to adjust to a new life in San Francisco, turmoil ensues in Headquarters. Although Joy, Riley's main and most important emotion, tries to keep things positive, the emotions conflict on how best to navigate a new city, house and school.

In this groundbreaking and illuminating film, Pixar Animation Studios examines the extraordinary depths of the mind and the powers of emotion and imagination. The Art of Inside Out provides an exclusive look into the artistic exploration that went into the making of this vibrant film. Featuring concept art including sketches, collages, color scripts, and much moreand opening with a foreword by actress Amy Poehler and introduction by the films writer and director Pete Docter, this is the ultimate behind-the- scenes experience of the making of this landmark film.

Pete Docter is vice president of creative at Pixar Animation Studios and the writer and director of Disney Pixars Inside Out. He directed the Academy Awardwinning feature films Monsters, Inc. and Up, and also worked as an animator, screenwriter, and voice actor. He lives in Piedmont, California.