Sign in | Register
HomeNew ArrivalsThe Art of Missing Link
Save 20% 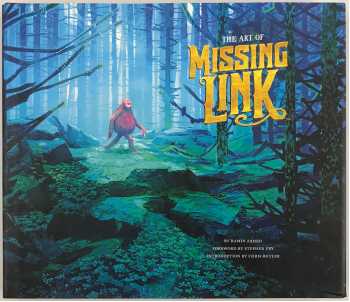 Art by Warwick Johnson Calwell, Louis Thomas, Ovi Nedeleu, Kent Melton, and others. With many photographs of the models, sets, and stop motion animators at work.

The Art of Missing Link is a lushly illustrated volume that goes behind the scenes of LAIKA's new stop-motion adventure.

The charismatic Sir Lionel Frost considers himself to be the world's foremost investigator of myths and monsters. The trouble is none of his small-minded high-society peers seems to recognize this. Sir Lionel's last chance for acceptance by the adventuring elite rests on traveling to America's Pacific Northwest to prove the existence of a legendary creature. A living remnant of Man's primitive ancestry. The Missing Link.

Mr. Link [is] the surprisingly smart, funny and soulful beast upon whom Sir Lionel's dreams depend. As species go, he's as endangered as they get; he's the last of his kind, and he's lonely. Proposing a daring quest to seek out his rumored distant relatives, he enlists Sir Lionel's help in an odyssey around the world to find the fabled valley of Shangri-La.

Together with Adelina Fortnight, an independent and resourceful adventurer who possesses the only known map to the group's secret destination, the unlikely trio embarks on a riotous rollercoaster of a ride. Along the way, our fearless explorers encounter more than their fair share of peril, stalked at every turn by dastardly villains seeking to thwart their mission. Through it all, Mr. Link's disarming charm and good-humored conviction provide the emotional and comedic foundation of this fun-filled family film.

From LAIKA, the animation studio behind the Academy Award-nominated Kubo and the Two Strings, Missing Link is a stunning stop-motion epic and raucous comedy. Featuring concept art from the film's creation--including sketches, storyboards, character designs, and much more--and illuminated by in-depth interviews with the film's creative team, The Art of Missing Link is a must-have companion to the film.

Chris Butler made his writing and directing debut with ParaNorman, and he has been a leading creative force at LAIKA for more than a decade. Missing Link marks his return as both writer and director. His work has been nominated for an Academy Award, a BAFTA, several Annies, and even the first GLAAD award nomination for an animated feature.

Fine in Near Fine dustjacket (light shelfwear to dustjacket)