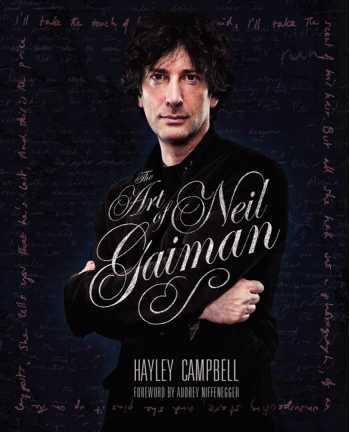 With unprecedented access to Neil Gaiman's personal archives, author Hayley Campbell gives an insider's glimpse into the artistic inspirations and musings of one of the world's most visionary writers.

Over the last twenty-five years, Neil Gaiman has mapped out a territory in the popular imagination that is uniquely his own. A master of several genres, including, but not limited to, bestselling novels, children's books, groundbreaking comics, and graphic novels, it's no wonder Gaiman has been called a rock star of the literary world. Now, for the first time, Gaiman reveals the inspiration behind his signature artistic motifs, giving author Hayley Campbell a rare, in-depth look at the contents of his personal notebooks and early work, even some of his abandoned projects. The result is a startling, intimate glimpse into the life and mind of one of the world's most creative visionaries. The book is the first comprehensive, full-color examination of Gaiman's work to date, tracing the genesis of his creative life as a starving journalist in the UK to his life as a successful comic book writer and, ultimately, a bestselling novelist.

Complete with running commentary, interview text, and annotated material that contextualizes the visual material, this deluxe compendium contains never-before-seen material and promises to be every bit as inspired as Gaiman is himself.

Novelist, comics writer, scriptwriter, poet, and occasional artist, there are few creative avenues Neil Gaiman hasn't ventured down--from unforgettable books like The Ocean at the End of the Lane and American Gods to groundbreaking comics and graphic novels like The Sandman and Violent Cases; from big-screen fantasies like Coraline and Stardust to small-screen epics like Doctor Who and Neverwhere; and from short stories to songwriting, stage plays to radio plays, journalism to filmmaking, and all points in between.

The Art of Neil Gaiman is the first book to tell the full story of his amazing creative life. Never-before-seen manuscripts, notes, cartoons, drawings, and personal photographs from Neil's own archive are complemented by artwork and sketches from all of his major works and his own intimate recollections. Each project is examined in turn, from genesis to fruition, and positioned in the wider narrative of Gaiman's creative life, affording unparalleled access to the inner workings of the writer's mind.

Utterly comprehensive, lavishly illustrated, The Art of Neil Gaiman is the fully authorized account of the life and work of one of the world's great storytellers.