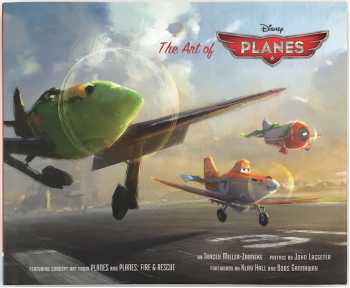 Concept art from Disney's Planes and Planes: Fire and Rescue.

In Disney's Planes and Planes: Fire and Rescue, the big-hearted crop duster Dusty Crophopper is full of dreams. In the first film, he overcomes his fear of heights to win the Wings Around The Globe Rally. In the second, Dusty learns his damaged engine will keep him from racing, but he finds the true hero within himself working alongside firefighting aircraft on a courageous wildfire air attack team.

The Art of Planes explores the beautiful concept art that went into the development of these two inspiring stories, including colorscripts, storyboards, character studies, sculpts, background art, and more. Insider insights from the films' artists and filmmakers, a preface by directors Bobs Gannaway and Klay Hall, and a foreword by Chief Creative Officer John Lasseter offer an invaluable and fascinating glimpse into the creative thinking involved in the making of these companion films.

Near Fine in Near Fine dustjacket (small light bump to the two upper corners, very light edgewear to dustjacket)