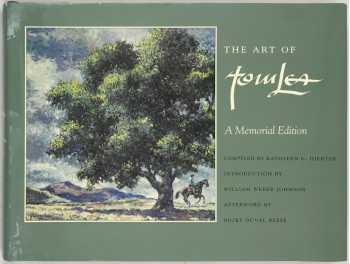 Tom Lea was a painter, muralist, book illustrator, novelist, and WWII combat artist. He specialized in the Southwest, but wrote about and illustrated many subjects with passion. This book is an excellent overview of his multi-faceted career.

Winner of the 1990 Southwest Book Award, presented by the Border Regional Library Association

Tom Lea was a realist who painted things as they are, but just happened to see more of what they are than most of us do. A muralist, painter, book illustrator, World War II artist-correspondent, historian, novelist, and humanist, Lea died in 2001 after creating in some sixty years a corpus of work that has captivated those who know it. This volume makes available the full range of his vigorous work. Old admirers of Lea's talents will delight in this presentation, and a whole new generation will be awed by the unique contribution he has made.

A Southwesterner from multicultural El Paso, Lea gave new vision to the misunderstood lands often thought of as barren wastes. As Kathleen G. Hjerter says in her foreword, in his paintings "the desert's melded colors are vibrant under many subtle gradations of light; the mesas and mountains reach up to a sky enormous enough to hold everyone's soul."

But it is not just the southwest. its life and lore that Lea knew. Any subject he portrayed in picture or words (he wrote several outstanding books, including The Wonderful Country) he first researched minutely. Thus, he brought marvelous detail to his portrayal of the Mexican bullfighter, the Australian ranches and Texas cattle of the King empire, and the Indians, pioneers, and ranch hands of his own corner of the world. In the Second World War, as an artist-correspondent for Life magazine, he captured both the weaponry and the emotions of war. On assignment in China he developed a love for that land that gave him not only many subjects for paintings but also his favorite and, in later years, most characteristic medium: Chinese ink applied with a fine brush.

In China, too, he came to know the ideogram whose symbols became for him, in William Weber Johnson's words, a "sort of personal artistic trinity": the earth, the sky, and man between-man linked very urgently and simply with cosmos, nature as the catalyst. These elements and this link-- interpreted through a stunning talent by a very private, honest, and modest artist--inspired the art of the incomparable Tom Lea.

Near Fine in Near Fine dustjacket (a few small marks on the front free endpaper, otherwise only very light shelfwear, tight, bright, clean)