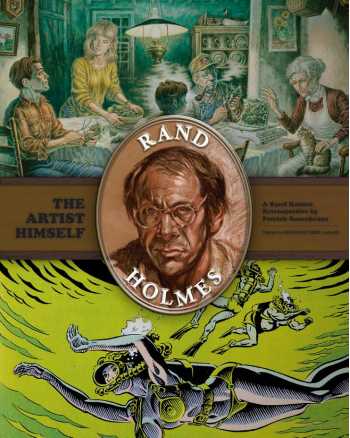 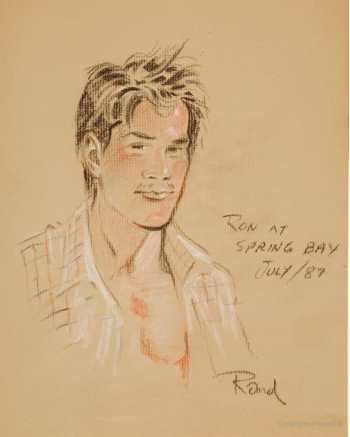 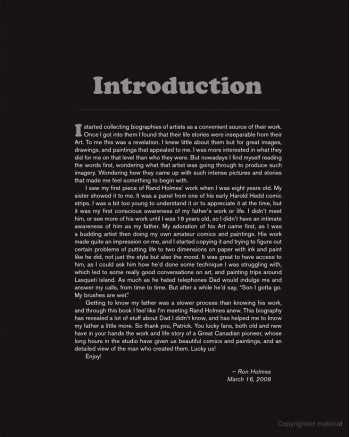 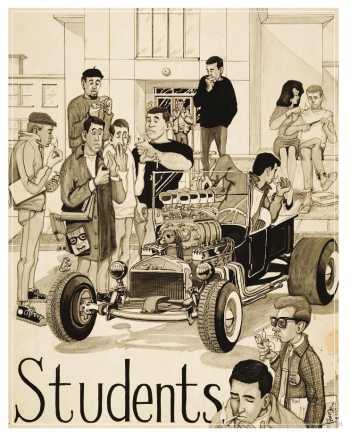 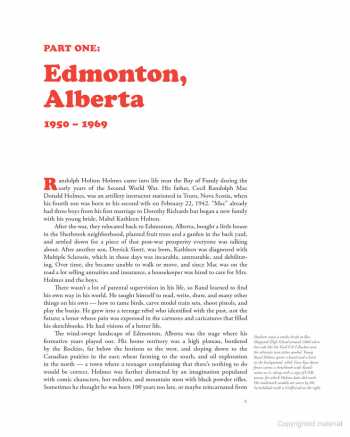 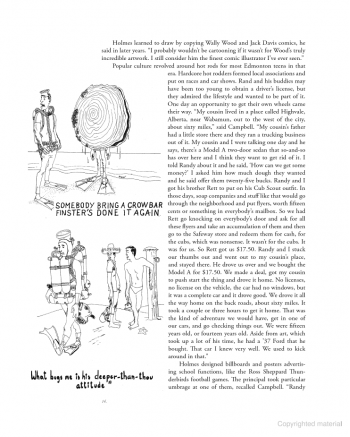 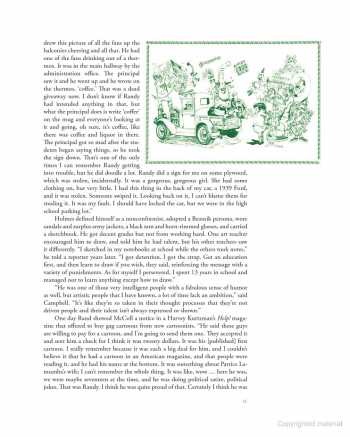 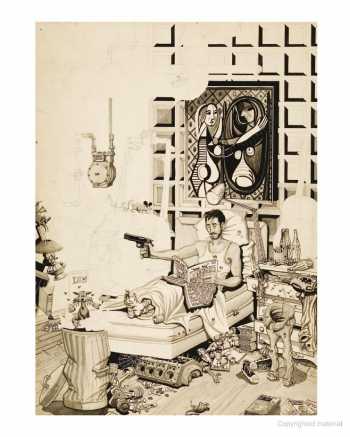 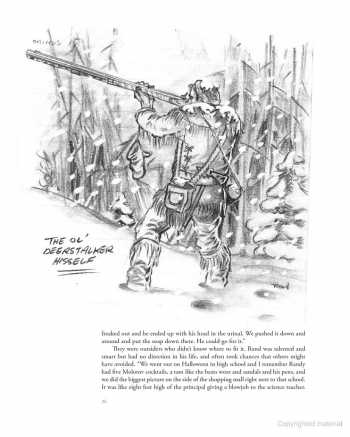 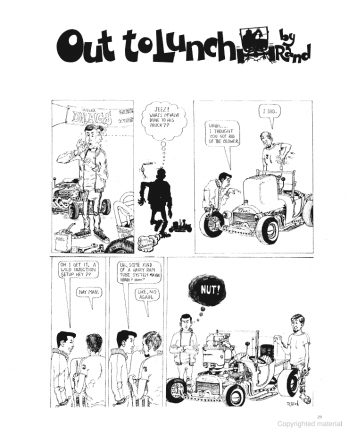 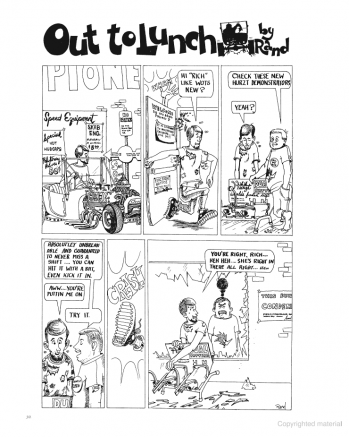 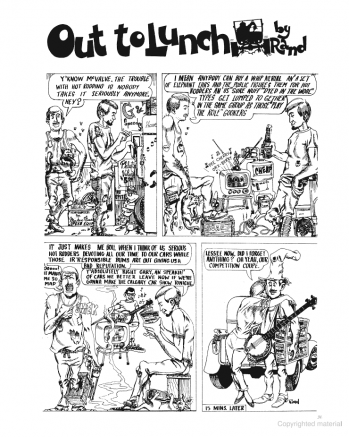 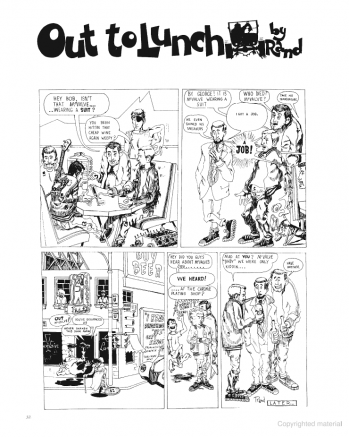 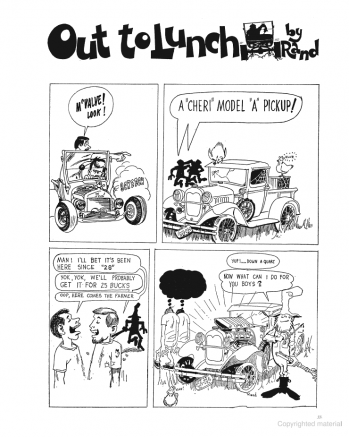 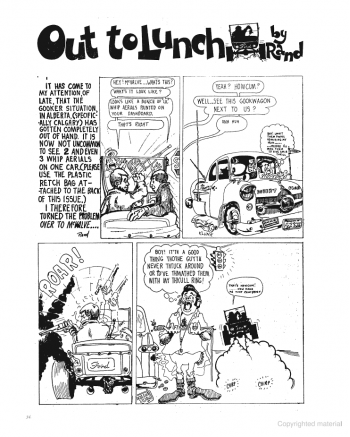 Rand Holmes was Canada's most revolutionary artist in his heyday, the star cartoonist at the Georgia Straight newspaper in British Columbia during the 1970s. His hippie hero, Harold Hedd, became the spokesman of the emerging counterculture as he avoided work, explored free love, and flouted drug laws. The Adventures of Harold Hedd spread across the globe in the wave of underground comix and newspapers of the era and Holmes became famous -- or at least notorious. While his comic character was bold and blatant, the artist was shy and quiet, well on his way to becoming a complete hermit.

This book is an intimate and expansive account of a very private man who expressed his deepest feelings in the then disreputable medium of comix. "He didn't talk much but he sure wrote a lot," avowed his widow Martha. This biography/retrospective includes generous selections from his private journals and correspondence, family photo albums, sketchbooks, and personal anecdotes from his friends and colleagues. His artistic history began haltingly on the lonely windswept plateau of Edmonton, flourished in Vancouver and San Francisco, and concluded peacefully on Lasqueti Island, a remote backwater in the Straits of Georgia where he lived out his dreams of pioneering and homesteading.

Holmes' life story is richly illustrated with drawings, comic strips, watercolors, and paintings that span his whole career, from the hot rod cartoons he drew as a teenager, dozens of covers for the Georgia Straight, pornographic cartoons for the sex tabloid Vancouver Star, to complete comic stories from Slow Death Funnies, Dope Comix, All Canadian Beaver, Death Rattle, Grateful Dead Comix, and many more. The full-length Harold Hedd comic novels, Wings Over Tijuana and Hitler's Cocaine are reprinted in their entirety together for the first time. This unique collection of art documents a lifetime of work by one of the most talented artists of his generation. Holmes died in March 2002 from Hodgkin's lymphoma, and his ashes are buried next to the Art Centre he helped build on Lasqueti Island. A retrospective exhibition of his original work was held five years later at the community hall.

Author Patrick Rosenkranz met Holmes in his salad days and remained in touch throughout his life. The Holmes family gave him complete access to their art collection and personal files, and encouraged him to tell the whole truth about Rand Holmes' life and work.

"Imagine a Jack Davis MAD magazine piece with heavier overtones; that was Holmes at his best, and that best is well-represented in The Artist Himself." -- The Onion A.V. Club

"Through excerpts from the artist's own journals and interviews with those who knew him, Patrick Rosenkranz presents his subject as a man of contradictions, both prodigiously gifted and painfully insecure. [...] Holmes's art was always marked by sharp visual wit and a sometimes astonishing attention to detail. He was indeed a genius, and thanks to Fantagraphics, he won't be a forgotten one." -- John Lucas - The Georgia Straight

"[T]he colorful (in many senses of the word) collection The Artist Himself... is a smorgasbord of senses working overtime, the coffee table book of the year for raunch-loving pop art fans and literary hedonists alike." -- Chris Estey - The KEXP-FM Blog (Seattle)

"The cartoonist and illustrator Rand Holmes... created hippie hero Harold Hedd, one of the more memorable fictional characters of the 1960s. Among the cognoscenti, Mr. Holmes is a peer of R. (Mr. Natural) Crumb and Gilbert (Fabulous Furry Freak Brothers) Shelton." -- Tom Hawthorn - The Globe and Mail

"The collection combines a fascinating biography of Holmes... with chapters of his finest work... The Canadian rarely gets his due among comics aficionados, but The Artist Himself should go a long way toward putting this underground legend on the list of greats." -- Alonso Duralde - Modern Tonic