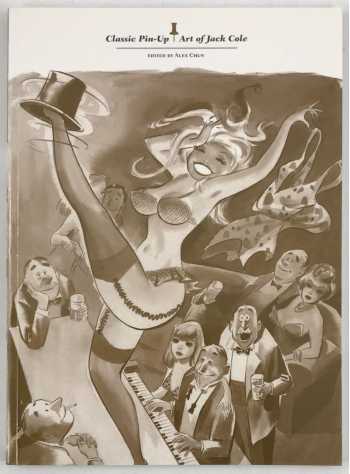 "Cole's goddesses were estrogen souffles who mesmerized the ineffectual saps who lusted after them." - The New Yorker

A collection of the rare '50s pinups that led to the artist's final gig, as Playboy's first star cartoonist. In the rarefied realm of classic cartoon pin-up art, nobody did it better than Jack Cole. With his quirky line drawings and sensual watercolors, Cole, under Hugh Hefner's guiding hand, catapulted to stardom in the 1950s as Playboy's marquee cartoonist, a position he held until his untimely death at the age of 43. Jack Cole has been justly celebrated as the creator of Plastic Man and an innovative comic book artist of the 1940s. Cole had sold a handful of cartoons to magazines such as Boy's Life, Colliers and Judge in the '30s and '40s, but after finishing his 14-year run on Plastic Man, he found himself back at square one in an idiom that didn't come naturally to him: the gag cartoon. According to Cole, his savior was the Humorama line of down-market digest magazines. This girls and gags magazine circuit proved to be the perfect training ground to regain his footing and develop his craft at single panel cartoons. While Cole may have been honing his skills as a gag writer, his ability to render the female form was already without peer. Though he signed his cartoons "Jake," Cole's exquisite line drawings and masterful use of ink-washa skill he carried over Playboy betrayed his pseudonym. In comparison to his contemporaries, however, Cole was probably Humorama's least prolific artist. Though his images were frequently used for covers, Cole's cartoons were few and far between, with scarcely a single drawing appearing every five issues. Along with a foreword by Warner Brothers Animation designer Shane Glines, this volume collects the best of these hidden gems, including several shot from Cole's stunning original art. Most of these drawings have not seen print in more than 50 years; taken together, they provide a rare glimpse into the singular artistry of Jack Cole.

Near Fine (very light crease to back cover otherwise Fine)