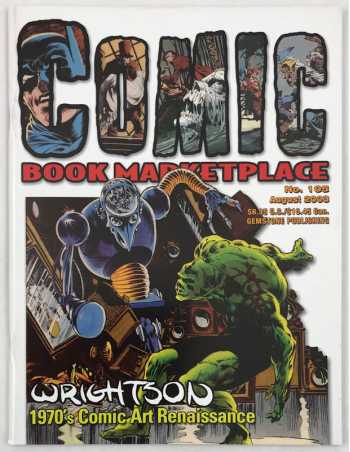 Starting in the mid-1960s, fantasy artist Frank Frazetta exploded onto the scene with his illustrations for paperback books and Warren's Creepy and Eerie. Frazetta's work was wildly influential on a group of young artists just cutting their artistic teeth...artists like Jeffrey Jones, Berni Wrightson, Michael Kaluta, and Frank Brunner, to name a few...and in the 1970s each of these artists came into his own in the field of comic books. CBM #105 features an in-depth look at the art and careers of these young turks, who, although initially inspired by Frazetta, have gone on to carve names for themselves as comic book artists. Also including our regular features: That Wonderful Year...1954 by Michelle Nolan, Nolan's Notebook by Michelle Nolan, CBM Marketwatch by our Advisors, The Naiman Report by Michael Naiman, Marketplace Mail and much, much more!