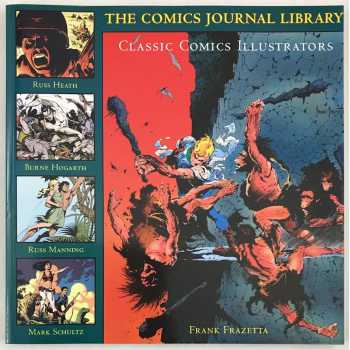 Frank Frazetta, Burne Hogarth, Russ Manning, Russ Heath, and Mark Schultz are the modern masters of illustration, here collected in their own words under one gorgeous, wrap-around cover. Together, these artists bridge almost 70 years of comics and fantasy art tied to tradition, craft and an emphasis on the human form.

Frank Frazetta is unquestionably the preeminent fantasy and science fiction painter and illustrator of the second half of the 20th century.

Burne Hogarth is well known as the visionary illustrator of the Sunday Tarzan series from 1939 to 1950, and the innovative educator who founded New York's school of visual arts in 1947.

Russ Heath best work was on Westerns, especially Arizona Kid and Kid Colt, Outlaw, which stood out for their realistic artwork and details.

Mark Schultz (Cadillacs and Dinosaurs) is a man caught in the apex of his work's influence within the field and provides an altogether different perspective on great art's role in great comics, discussing his forays into Hollywood and more.