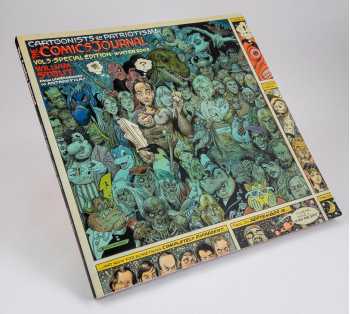 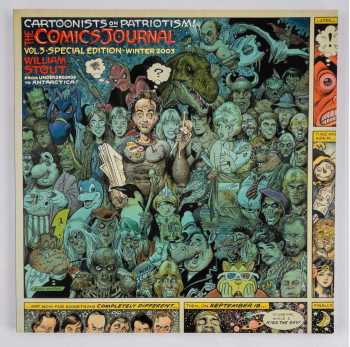 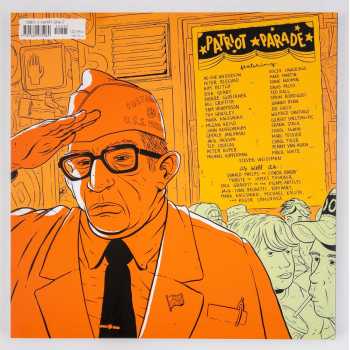 The third in The Comics Journal's series of oversized coffe-table volumes, this lush collection of art, comics and commentary kicks off with a gigantic, career-spanning interview with legendary illustrator (and cover artist) William Stout, complete with copious illustrations and paintings.

There's also an extensive appreciation of the cartoon work of noted humorist James Thurber (including a gallery of Thurber cartoons and a four-page comics tribute by Ivan Brunetti), Paul Gravett's remembrance of the seminal British indy-comix magazine Escape (complete with new strips drawn just for this volume by many of that magazine's noted cartoonists), critical appreciations of numerous fine cartoonists (Lynda Barry, Tom Hart, Michael Kaluta, and more) by the cream of our best critics -- and, as if that weren't enough, a 70-page comics section on the theme of "patriotism," with contributions by Joe Sacco, Phoebe Gloeckner, Bill Griffith, Megan Kelso, Peter Bledvag, Carol Swain, Gilbert Shelton, Penny Van Horn, Ho Che Anderson and many, many more!

William Stout is one of the most accomplished, critically acclaimed and commercially successful illustrators, painters and cartoonists in America today. He has, for over 30 years, brought consummate draftsmanship, impeccable craft, painterly nuance and a mature vision that is, by turns, riotously Rabelaisian and awe-inspiringly naturalistic to virtually every form of visual popular culture -- from comics to film to gallery exhibitions. The Comics Journal Winter 2003 Special spotlights Stout's work with a beautiful cover, painted especially for this volume, and an interview with the artist in which he proves to be not only a great artist but an engaging raconteur and high-flying theorist as well. The interview covers his long career, which includes, among other highlights, his solo comics as well as his collaborations with Jack Kirby, Moebius, Al Williamson, Russ Manning and Harvey Kurtzman; his various film work for Jim Henson, Walt Disney and others; his album covers for Firesign Theatre, The Rolling Stones, and more. Essays included in the special are: Paul Gravett on "Whatever Happened to the Escape Artists," with new strips by the most prominent artists who appeared in that groundbreaking '80s British comics anthology (Escape), including Eddie Campbell and Carol Swain; Donald Phelps on Lynda Barry; Tom Spurgeon on Tom Hart; and Bill Blackbeard on Milt Gross. "Cartoonists on Patriotism" informs the comics section this time around with the comics of Joe Sacco, Bill Stout, Kim Deitch, R. Crumb, Bill Griffith, Jack Jackson, Sam Henderson, Tom Toles and many others!

Near Fine (light rubbing to the corners, no thumbdents, internally Fine, very flat, tight, and clean)