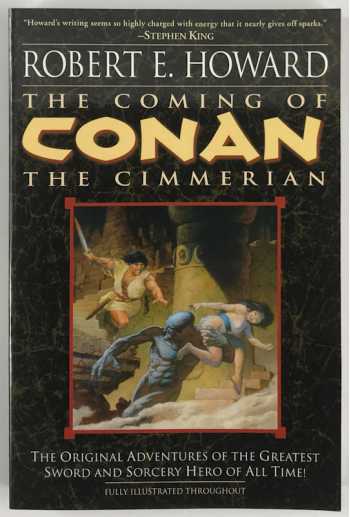 "Between the years when the oceans drank Atlantis and the gleaming cities . . . there was an Age undreamed of, when shining kingdoms lay spread across the world like blue mantles beneath the stars. . . . Hither came Conan, the Cimmerian, black-haired, sullen-eyed, sword in hand . . . to tread the jeweled thrones of the Earth under his sandalled feet."

Conan is one of the greatest fictional heroes ever created--a swordsman who cuts a swath across the lands of the Hyborian Age, facing powerful sorcerers, deadly creatures, and ruthless armies of thieves and reavers.

In a meteoric career that spanned a mere twelve years before his tragic suicide, Robert E. Howard single-handedly invented the genre that came to be called sword and sorcery. Collected in this volume, profusely illustrated by artist Mark Schultz, are Howard's first thirteen Conan stories, appearing in their original versions--in some cases for the first time in more than seventy years--and in the order Howard wrote them. Along with classics of dark fantasy like "The Tower of the Elephant" and swashbuckling adventure like "Queen of the Black Coast," The Coming of Conan the Cimmerian contains a wealth of material never before published in the United States, including the first submitted draft of Conan's debut, "Phoenix on the Sword," Howard's synopses for "The Scarlet Citadel" and "Black Colossus," and a map of Conan's world drawn by the author himself.

Here are timeless tales featuring Conan the raw and dangerous youth, Conan the daring thief, Conan the swashbuckling pirate, and Conan the commander of armies. Here, too, is an unparalleled glimpse into the mind of a genius whose bold storytelling style has been imitated by many, yet equaled by none.