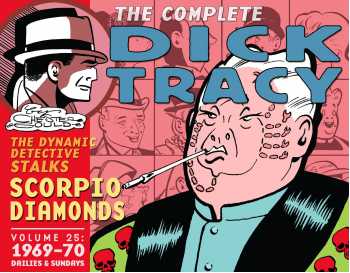 Dick Tracy closes out the 1960s by moonlighting -- literally! The master sleuth takes a part-time second job as Head of Security and Law Enforcement for Diet Smith's operations based on the moon. Soon Tracy learns that the international crime syndicate, the Apparatus, has infiltrated Smith's organization on the lunar surface. Determined to expand its nefarious empire, the Apparatus snares Dick and Tess Tracy, leaving them caught in one of the most frightening death traps in the history of the series. Two major characters are also introduced. First, male cartoonist Vera Alldid, who comes looking for his step-uncle B.O. Plenty and instead finds himself enamored with B.O. and Gravel Gertie's daughter Sparkle. Is there such a thing as "kissin' step-cousins?" The second new cast member is Groovy Grove, fresh from prison after serving twelve years for a crime he didn't commit. And then Tracy and his relentless crew pursue the Zodiac gang of bank robbers, whose mastermind is the grotesque villain Scorpio. All this and more in these classic Chester Gould comic strips, from April 3, 1969 to December 23, 1970.