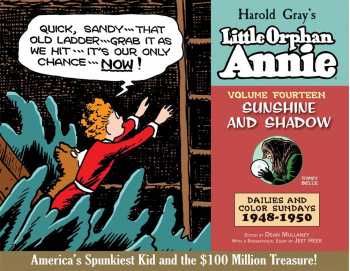 A chronological reprinting of one of the most important comic strips of the 20th Century. Annie is a cultural icon--in both her red-headed, blank-eyed appearance, and as an embodiment of American individuality, spunk, and self-reliance. Even those who don't know strip are keenly aware of the plucky orphan, her loveable dog Sandy, and her adoptive benefactor, "Daddy" Warbucks, through the Broadway play, the hit movie, and the song "Tomorrow," made famous by both.

What would you do if you found $100 million in currency, gold bullion, and sparkling gems? Annie has this enviable problem as the 1940s come to a close in Harold Gray's epic Little Orphan Annie. America's spunkiest kid, however, fails to heed the advice of the mysterious "witch" named Gypsy Belle, who warns of trouble and danger associated with the treasure. Soon enough, the wayward waif is evading mobsters, murderers, and...government tax collectors! Gray also dramatically responds to the anti-comic-book hysteria in this pre-Seduction of the Innocent era, as Annie and other children try to prevent the adults from burning down the library! And that's just ONE of the four stories in the book.