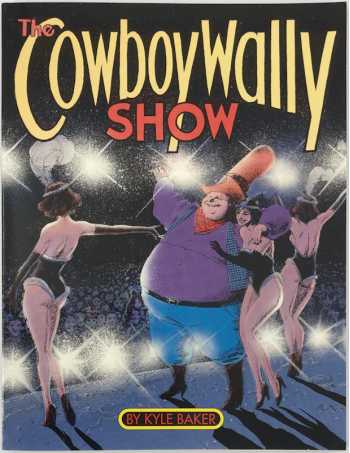 A Fine first printing of Kyle Baker's first independent graphic novel from 1988. Underappreciated at the time, this work has grown in stature since, as the audience caught up with its cutting edge comedy.

Meet Cowboy Wally. He's a slightly lewd, always rowdy fictional combination of W.C. Fields and a Texas oil magnate, with a bit of Mr. Rogers thrown in for good measure. Through his own sloppy, good-natured fumbling, he becomes one of America's most famous celebrities. In this wonderfully funny tale, Cowboy Wally traces his own "stellar" career from the early days as a kiddie TV show host ("Cowboy Wally's Shoot-'Em-Up Laugh Riot") to theme-park owner and movie producer. (His films include Cowboy Wally's Hamlet, which was released on a triple bill with The Making of Cowboy Wally's Hamlet and Ed Smith: Lizard of Doom.) When he's called before a Senate subcommittee on morality--for saying grace wit his mouth full--his fame is firmly established and the fun begins.